This artist’s statement describes the development of a participatory performance project ‘Perambulator’. Conceived in response to the shift in walking practice experienced in early motherhood, the project invited other pram users (predominantly mothers) to walk together exploring and highlighting the everyday awkwardness of pram use in the city. Alongside an overview of the projects’ methods: walking, talking and mapping, connections to walking art and participatory art practices are considered.

I began working with walking, incorporating it into my creative practice, in 2004.

In collaboration with the artists Gail Burton and Serena Korda we created a project entitled walkwalkwalk: an archaeology of the familiar and forgotten using walking to explore our local environment; the political meshwork of connections between people and places. We created a series of walks as live art events: nightwalks, a musical walk, guided tours, as well using walks as generators for other work: films, field recordings, performances and installations. I began to think of myself as a walking artist.

Perambulator (n.) A person who walks or travels through or about a place; a traveller; a pedestrian.1

Flash forward 8 years. In 2012, when my son was a few months old, I was invited to make a walk for a project at Lewisham Art House.2 Initially I ruled this out. walkwalkwalk were no longer making live work together and my practice before would have required multiple research trips, extensive walking in the area, exploring, planning, preparing. This now felt entirely unfeasible.

Instead of saying no I decided to try to make a piece that would be possible to do with my baby in tow. In the first months of his life, pushing his pram around the area that I lived in, I was struck by the number of detours that I had to take – the route alterations, the impediments to smooth passage. My familiar routes were rudely disrupted, forcing a new relationship with the very physical details of the urban environment. A new radar evolves – seeking out the dropped kerbs and the ramps – avoiding steps, narrow gaps, awkward turns.

Perambulator (n.) A carriage for a baby or young child, which may be pushed along by a person on foot. Now usually shortened to pram.3 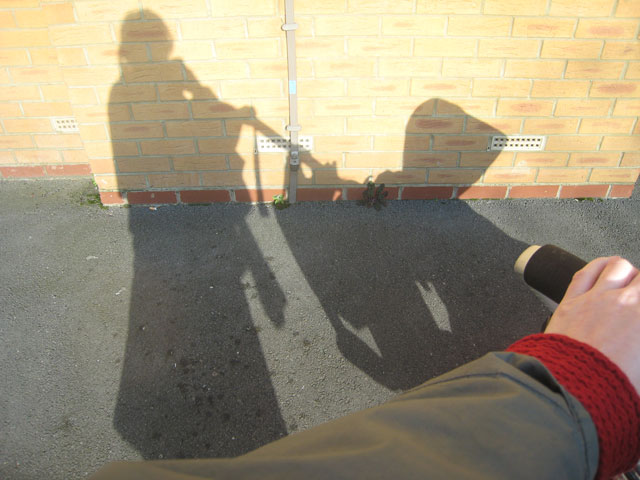 Viewing the city through this new lens feels political. Losing the freedom of easy mobility – a freedom that I hadn’t been aware of before – connects me to a massive group of people (predominantly women) in the same position, encumbered by wheels. This became the premise for Perambulator – making this visible through a mass walking with prams. So, simply, pram users were invited to meet at the gallery, and go for a walk around the neighbourhood.

Walking with prams around Lewisham Art House was awkward – kerbs were too high, cars were parked on pavements without leaving enough space to pass, steps were steep, gates designed to block mopeds from driving into parks were difficult to maneuver around. The walkers with prams chatted about their everyday issues, their sleep deprivation levels, and those without prams helpfully lifted, shifted, jiggled and had a go at pushing as we navigated.

By walking as a group we created a performance – the spectacle of multiple prams and their pushers negotiating each obstacle highlighted it far more than a single walker would. I’m drawn to Jane Jacobs’ writing on the ‘ballet of the sidewalk’4 when trying to describe the aesthetic of the Perambulator walk, but despite the poetry of that term, it is more akin to Jacobs’ description of what the sidewalk ballet is not, ‘everyone kicking up at the same time twirling in unison and bowing off en masse’5 and so we disrupt the ‘intricate ballet in which individual dancers and ensembles all have distinctive parts which miraculously reinforce each other and compose an orderly whole’.6 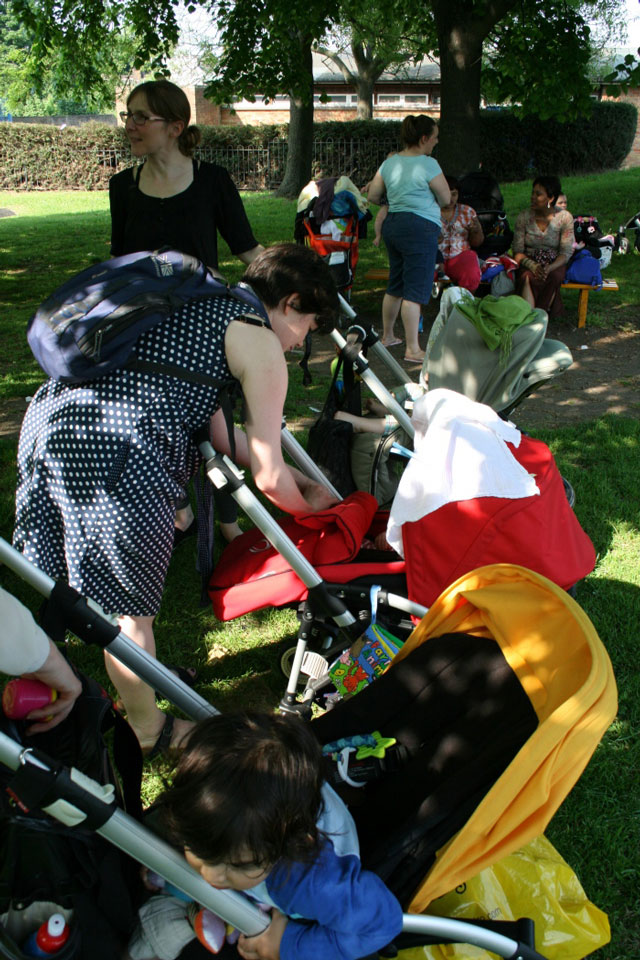 The walk also makes a space for interaction and sharing, of stories, experiences, anecdotes about the physical and psychological peculiarities of new parenthood. There is a sense of camaraderie to the walk, the performance. The shared decision making in our navigation along with the shared tasks of pram maneuvering, combined with the similar circumstance of the participants creates a community, a combination of practice and place that produces a ‘collage of collaboration’.7

In late 2012 I started talking with Deveron Arts in Huntly, Scotland, about making a more extended version of Perambulator there. In October 2013 I had another baby, Ruby, so it was not until May 2014 that I made it to Huntly, with both children. My residency was part of Deveron’s Walking Institute. Previous projects include a UK border walk exploring the restrictive visa policies for overseas artists, and the Slow Marathon by Ethiopian artist Mihret Kebede – a walked marathon-length route around the town symbolically covering the distance from Addis Ababa to Huntly. In contrast my proposed walking project would take place entirely within the town, and (as it emerged) on its edges, exploring the everyday walking experiences of parents and carers using prams.

perambulator, n. spec. A person who performs a perambulation to determine the boundaries of a territory; a surveyor. Now chiefly hist.8 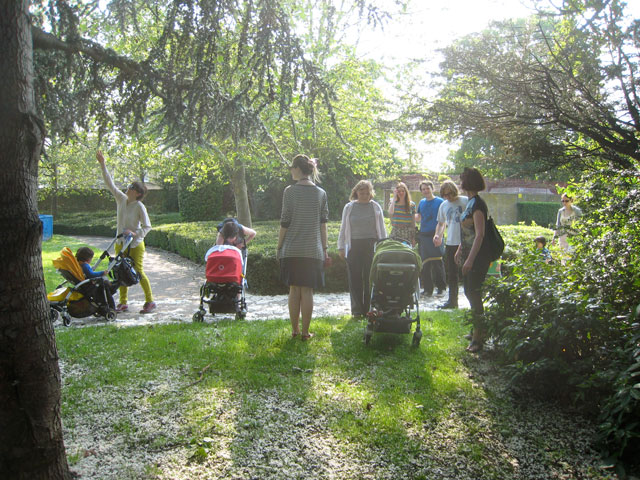 In Huntly I walked with mothers and their children, with my kids in our everyday routines, with community health workers and arts officers. When I couldn’t find anyone to join me I walked on my own with Ruby in the pram – testing the edges to see how far I could get. Accounts of each of the walks were published on the project blog, along with photographs and GPS map routes. I also produced two larger scale participatory performance walks – live art events that began and ended the project, the Baby Slow Marathon and the Perambulator Parade.

The Baby Slow Marathon tied in to another walk – Kebede’s Slow Marathon had been made into an annual event, and was due to take place at the end of my first week in town. I led a group of pram users along the route that the full marathon walkers used to come into town – going out to meet them, stopping at the point past which we could not wheel any further. We made it halfway up the Clashmach hill, a spot with a bench and a beautiful view, stopping there for a picnic shared with the long walkers as they passed us on their final descent. 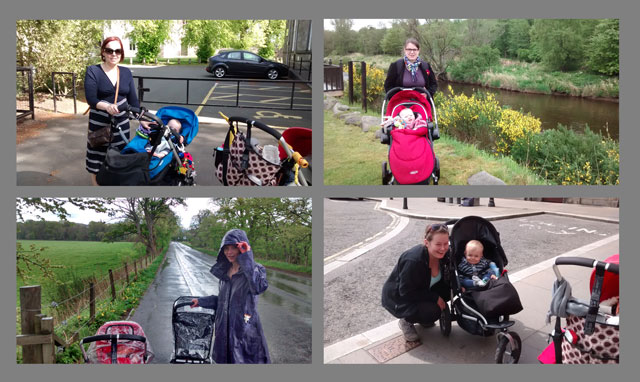 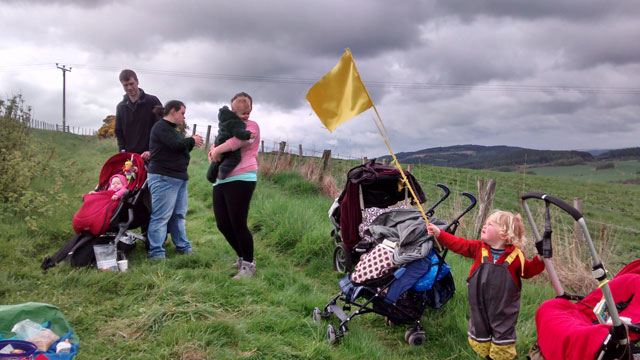 As the project progressed people told me about the horrors of navigating the pavements on bin day, about forest walks they used to do before they had kids, about different approaches to walking-for-napping. I took a large map into playgroup and asked people to mark awkward spots, narrow pavements, steep steps, slippery surfaces. This process helped to shape plans for the Perambulator Parade, which sought to collectively perform the awkwardness of pram walking in the town – extending the idea begun with the Lewisham walk, but with a pre-designed route devised in collaboration with local participants. 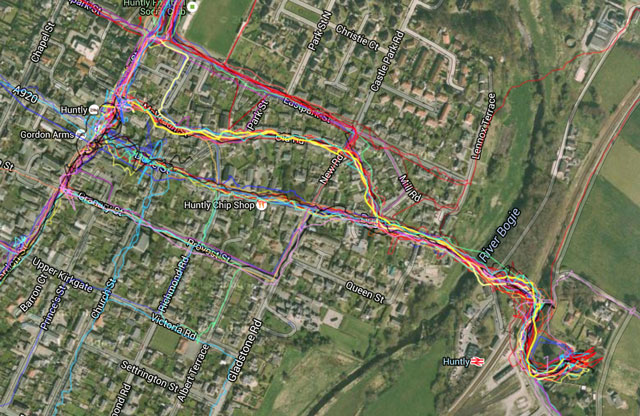 After the success of the project’s first event the Perambulator Parade seemed to falter at every turn. It wasn’t feasible to get permissions in place to follow a route around so many small streets. I would have liked to have continued without permission – spilling out into the road, getting in the way, causing a nuisance. But I could see that my participants would not be happy about that.

This quandary raises an important point about participants, the role that they play in the work – and my relationships with them. Best et al9 helpfully discuss different kinds of ‘others’ who exist in participatory art projects – defining participants as one key category, subdivided into more than 20 different types. Pondering whether my participants are ‘content providers’ or ‘co-authors’, ‘sub’ or ‘co-creators’ enables me to compromise, not purely I have to admit through artistic generosity (though I do have a genuine desire to recognise their ‘other’ roles as ‘creative contributors’), but also in the face of the practical: if I do something that they don’t want to do they simply won’t come. It’s a compromise between my desire for a genuine collaboration, and for a genuinely activist performance.

In the end the parade followed a popular leisure route from the Castle into town. Around 30 people joined the procession, with a banner, flags, and decorated prams. It made a finale to my project, a performative celebration of pram use, but it did not do what I had hoped in relation to occupying, commenting on, claiming or disrupting space.

Perhaps it’s helpful not to consider the finale as the main event, or outcome, of the project, but to think about how the smaller, quieter activities functioned and operated in relation to my aims.

This connects onwards to the project post-Huntly. Writing about and talking about the work has been its continuation so far, enabling me to think extensively about its core ideas. Through this writing and talking new opportunities for doing and making are starting to emerge, prompting me to consider how a project can ebb and flow, shifting scales in different phases. So the activism at the project’s heart swings from a shift in personal viewpoint – reframing life in relation to art, reflecting on mobilities and life transitions – borders, boundaries and obstacles and how they might be overcome. Becoming now a collaborative project with my slightly older son who often operates the camera for new Perambulator nap self-portraits, and of course my daughter – without whose need for naps the new works would not exist. 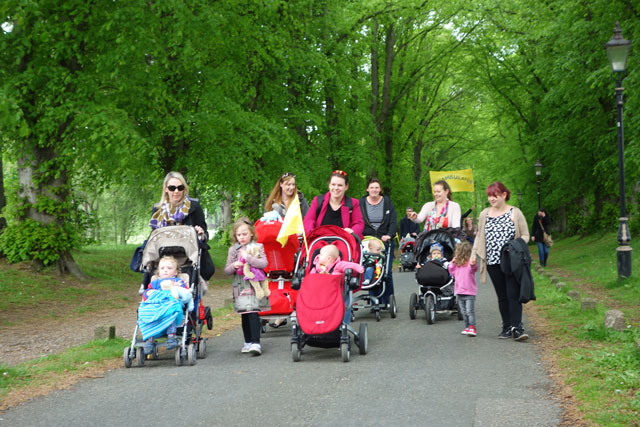 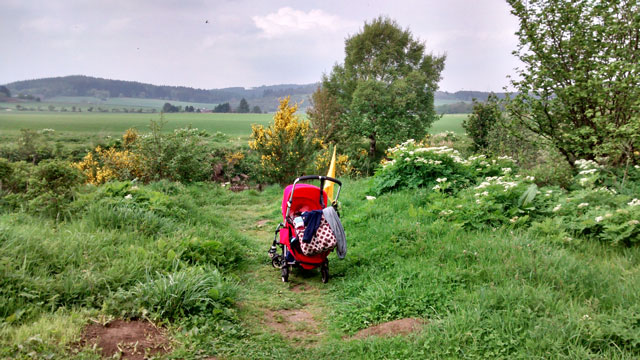 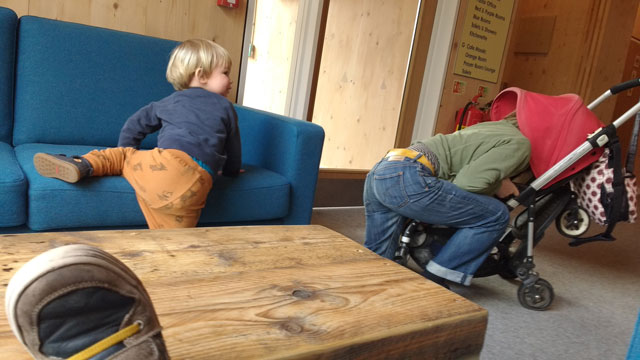 Perambulator (n.) A person who performs a perambulation to determine the boundaries of a territory; a surveyor.

Perambulator (n.) A carriage for a baby or young child, which may be pushed along by a person on foot. Now usually shortened to pram.

Perambulator (n.) A person who walks or travels through or about a place; a traveller; a pedestrian.10