Hollie McNish is a published UK poet and spoken word workshop leader who has been taking the scene by storm since her first reading in 2009. She has released two poetry albums, ‘Touch’ and ‘Push Kick’, both to critical acclaim. She has appeared in venues as diverse as Glastonbury festival, Ronnie Scott’s Jazz Bar, London’s Southbank Centre, and Cambridge University. She won the 2009 UK Poetry Slam and finished third in the World Slam du Monde, Paris. She has been featured on Radio 4’s Poetry Diaries, Women’s Hour and BBC 2. Most recently, she was commissioned by Radio 4 Woman's Hour to write a poem to open the Southbank Centre's 'Women of the World Festival', entitled WOW! Her poetry can be found at www.holliemcnish.bandcamp.com, and the Spoken Word/Poetry Workshops at http://www.pagetoperformance.org, and http://www.pagetoperformance.org 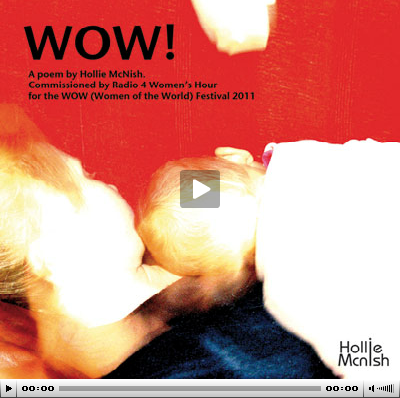