Christine Wilks is a British writer and artist who creates Electronic Literature, e-poetry and digital artworks for the web at www.crissxross.net and engages in collaborative remixing at www.remixworx.net. Her playable media fiction, 'Underbelly', won the New Media Writing Prize 2010. Her work is published in online journals and anthologies, including the 'Electronic Literature Collection, Volume 2', 'Hyperrhiz: New Media Cultures, issue 08', 'Studies in the Maternal, issue 2', 'The Line of Influence', and De Geuzen's 'Female Icons'. She has presented her works of e-literature at festivals and conferences, including Language in Digital Performance at ICIDS 2010, Ilkley Literature Fringe Festival, The Electronic Literature Organization Conference 2010, Performance Writing 2010, Transliteracy Conference 2010, e-Poetry 2009, Writing Bodies/Reading Bodies in Contemporary Women's Writing 2009, Electronic Literature in Europe 2008, Digital Resources for Humanities and the Arts 2008 and Interactive Futures 2007. Before becoming engrossed in the web, she made short films, videos, installations and wrote screenplays. She is Creative Director of Make It Happen, e-learning specialists for voluntary and non-profit organisations.

'Underbelly' is a playable media fiction created for the web about a woman sculptor carving on the site of a former colliery in the north of England, now landscaped into a country park. As she carves, she is disturbed by a medley of voices and the reader/player is plunged into an underworld of repressed fears and desires about her sexuality, potential maternity and worldly ambitions mashed up with the disregarded histories of the 19th Century women who once worked underground mining coal. 'Underbelly' incorporates a rich and often grotesque mix of imagery, spoken word, video, animation and text, and the reader must explore its mysterious map-like interface, using their mouse to play the story.
How to Cite: Wilks, C., 2011. Underbelly. Studies in the Maternal, 3(2), p.1. DOI: http://doi.org/10.16995/sim.173
149
Views
Published on 01 Jul 2011
CC BY-NC-ND 4.0 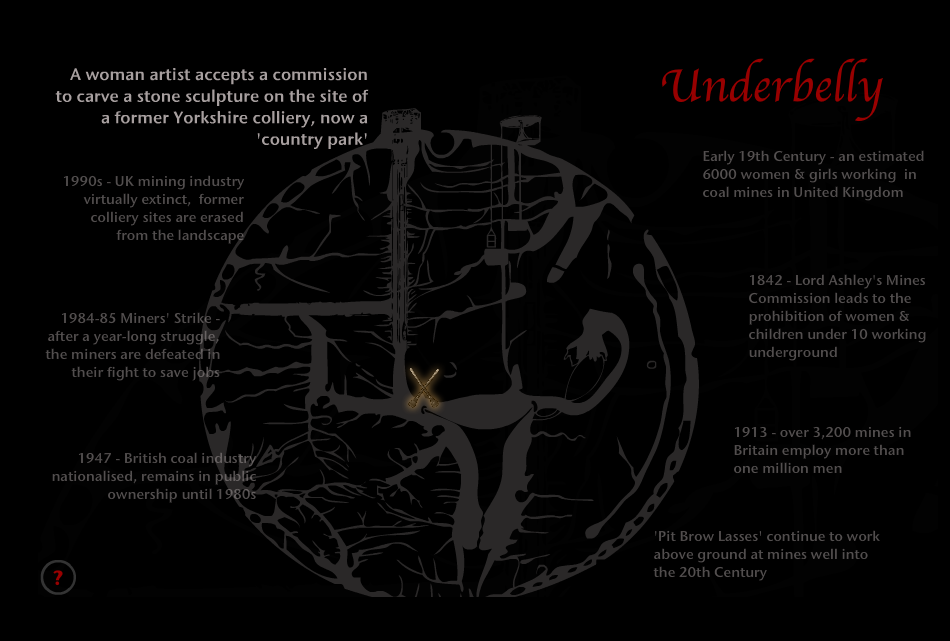