A decade of Studies in the Maternal parallel to 10 years of parenting. Reflecting on an embodied journey with the help of art.

As Studies in the Maternal approaches its 10th birthday, so does my eldest child, Frida. I therefore take this opportunity to write for the anniversary issue of the journal also as a chance to pause and to reflect on what has happened in my life across a decade. Interestingly, like an ouroboros, I feel as though I am somehow back where I started.

A little over 10 years ago, I was partway through my Art History PhD, generally feeling as though my intellect was weighing heavy, and that I needed to readdress my mind/body balance. I did not know how to do this really, but my wish for change seemed to filter through into the world as I soon met my long-term partner. Not long after that, I became pregnant.

The embodied experience of pregnancy combined with a birth, which of course did not go to plan, helped me to completely let go of control over my life in a way that I had never done before. 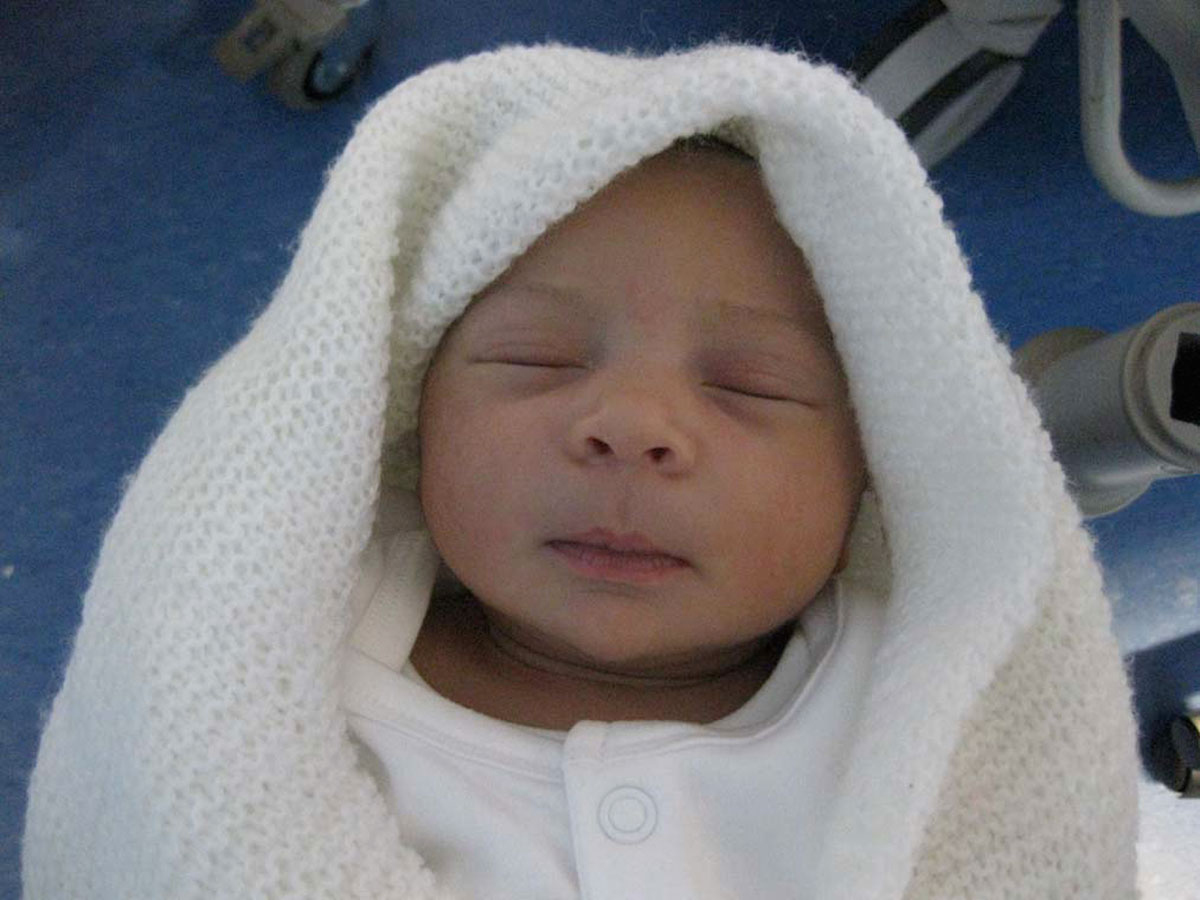 Frida on the day she was born.

Returning to the PhD while still nurturing a young infant taught me that I needed tactility to be able to understand concepts thoroughly. I became quite frustrated by words and the invisibility of intellect. Instead, I really wanted to ‘see’ what I was doing. I wanted to hold what I had made, like holding my baby. So, I bound my thesis in red wool and used it as an object around the house, as a prayer mat sometimes. I also wanted the PhD object to remain unopened, uncut, as although the experience of having a baby had reinforced for me the joy of creation it had also strongly reignited the pains of separation.

I also did an alternative version of the PhD, ‘PhD in 7 Pages’, which by the end of the four-year writing experience somehow said more to me than the entire 80,000-word thesis. It was at this time that I started to think tentatively about being an artist rather than an art historian. 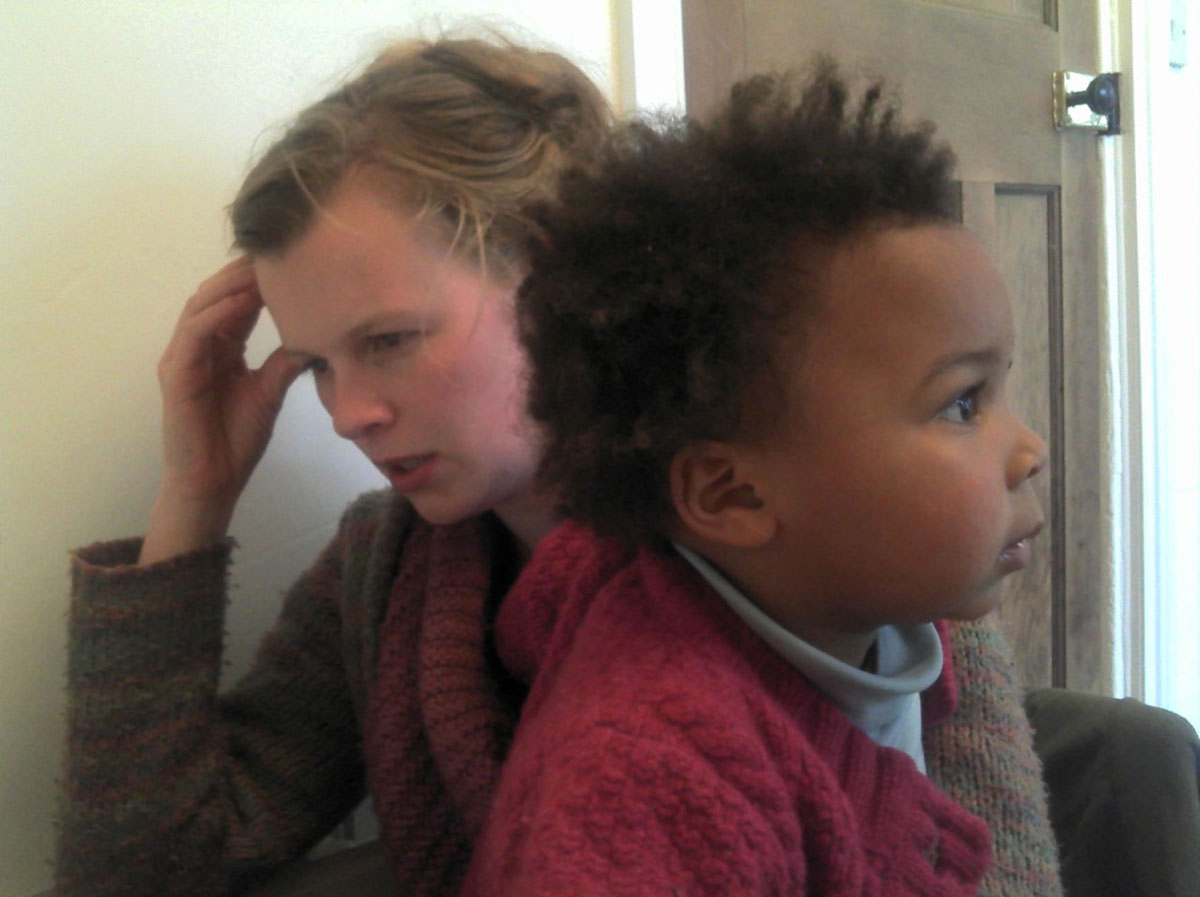 Me and Frida in 2012, deadline fast approaching for my final PhD hand-in.

I see a big part of my art, and indeed my overarching purpose, to be about combining different strands, somehow braiding life together. I was thinking at this time about the great influence and importance of my academic background and about the artists that I had come to consider as my greatest inspirations. These include Frida Kahlo, Louise Bourgeois and Tracey Emin. I noted their continued use of the colour red and the recurring subject of birth throughout their careers, whether this was the birth of a healthy baby, the loss of pregnancy, or an imagined experience. Birth in all its guises was already a major theme for me (both in my art and in my research), but I wanted to move the subject forward. I felt that the best way to do this was to start actually using blood as material.

I first utilised blood in my artwork when I had a miscarriage in 2011; making a portrait of the foetus with its own tiny body felt like the best way to honour the life that was not to be. Blood speaks to me of so many essential human experiences—of health and creation, but also loss and pain. Following the birth of my second healthy child, I started to use placenta blood. More recently, I use menstrual blood.

I went on to have a third child, and now a small trio of children surrounds me. 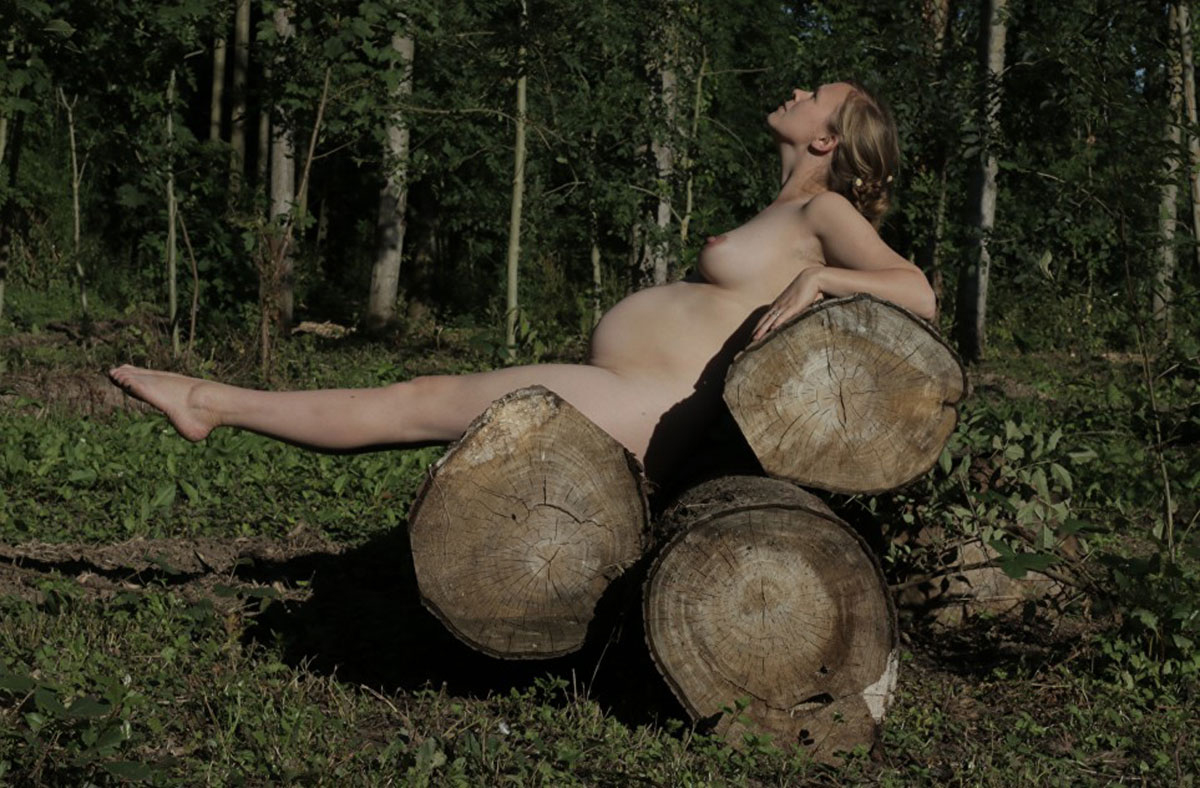 When pregnant with my third child, I was making a lot of art, feeling very inspired but perhaps also slightly conflicted that I had never pursued my academic career. At this point in my life, my eldest child, my daughter Frida, helped me to experience a kind of revelation. She had just started school, and we would pass a café on the way to and from school every day. After some months had gone by and we had become really friendly with the lady who ran the café, the lady asked me the question that I always dreaded: ‘what is it that you do Rebecca?’ I did my usual long pause, and I was just about to start the ‘oh well, I write, umm, I have a PhD in Art History, but I have always made my own work, blah blah…’, but luckily on this memorable occasion the pause gave my daughter the time to say, ‘My Mummy is an artist’.

I had never said this to Frida; she had decided, age 5, entirely on her own, that I was an ‘artist’. I now never doubt that this is what I am. I felt a great new surge of solidified identity that had been entirely supported by my children. With newfound vigour and confidence, I continued to make a lot of images with blood, and also pomegranate juice. Both materials really help me to relinquish control and allow the marks to form without focusing on a finished result.

At the moment, I remain driven by my ongoing series of tiny blood circle paintings. They say a lot about what I am trying to achieve, linking everything together. Interestingly, it is something that I did as a child with felt tip pens, drawing shapes and then tiny circles within those shapes. But it has taken observing the infancy of my own children to recover this practice. My friend asked if I could describe to her what this series of works is about. This is how I responded at the time about one particular piece:

It is part of an ongoing series in which I am using my menstrual blood as material. I hope it is not obviously blood, and especially not menstrual, as I don’t want it to scream of feminism, but at the same time, the bodily nature of the material is important to me, which provides contrast to a more meditative/spiritual experience that I have when actually repetitively drawing the tiny circles. They are for me about freedom and abundance, but also about chains and restriction. They are bodily, celestial landscapes, and I try to make the forms freely without too much control… usually lots of circles, orbs and mountain shapes emerge. And I guess the idea of giving back something from me (an offering of thanks to the higher forces that be?), like using blood to help grow, fertilise, bring forth newness, is also important… 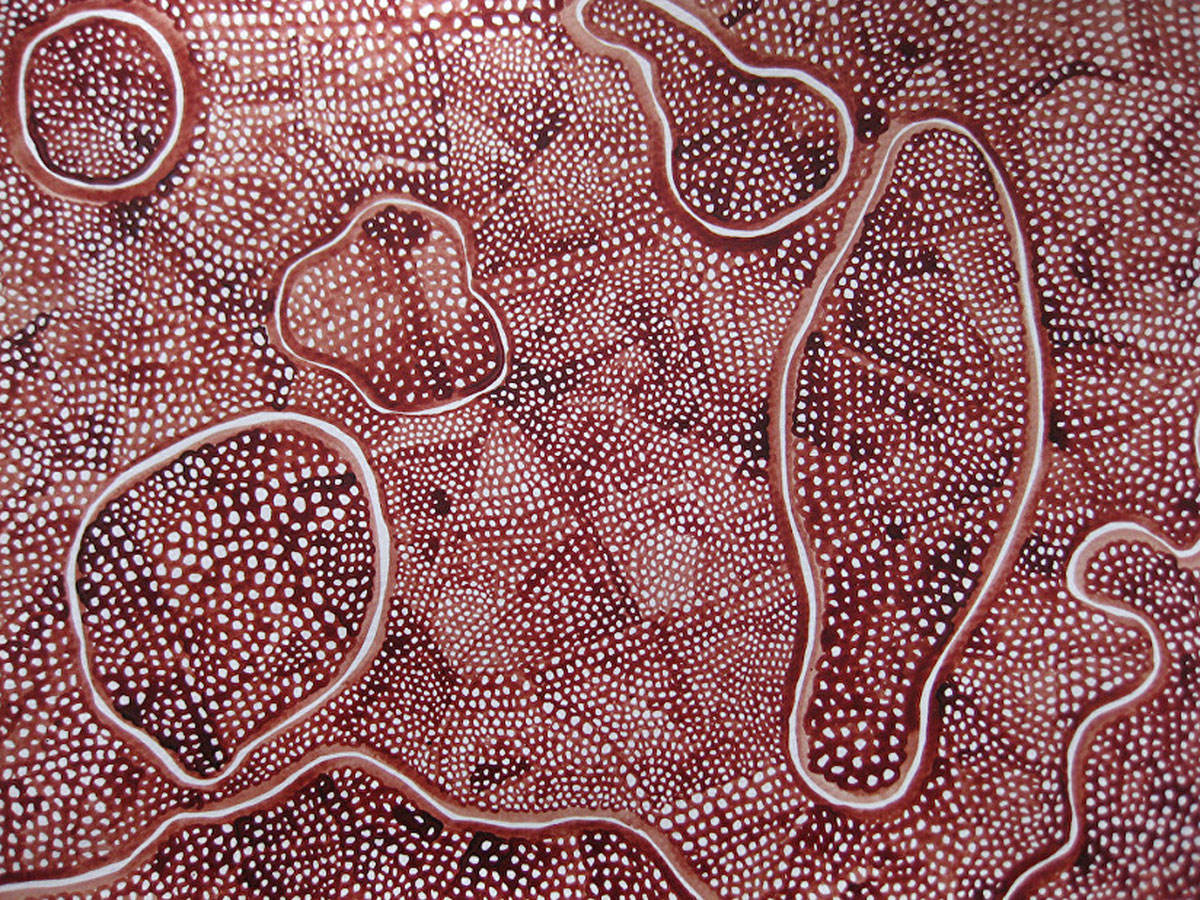 Having always been drawn to natural materials, being naked outside, birth, flowers, feathers, and repetition, there has always been a problematic essentialist aspect to my work. My personality adds to this as I am not in any way interested in self-promotion, and I tend to hide away a bit (be that in my studio, in the library, or on the school run). I have so far managed to cling on to a very old Nokia phone that is not connected to the Internet, and I do not have any presence on social media despite some fellow artists’ advice to the contrary. I have always intuitively felt that there is great strength to be gleaned from listening to nature, and to listen you need to be focused and not distracted. While contemporary society has sometimes suggested that aligning the female first and foremost with nature can be restrictive, this has never been the case for me. I am the fruit that I eat, the flowers and feathers that I put in my hair, and I am a part of the land upon which I stand and will not be separated from that.

It has therefore been an absolute joy and pleasure for me to discover and explore the work of Madge Gill and Lucihita Hurtado through each of their solo exhibitions this year (Gill at The William Morris Gallery and Hurtado at The Serpentine). Neither of these artists sought recognition. Having said this, they were/are ambitious artists, both intensely serious about their work and both interestingly entwined in the art world. Still, they never prioritised self-promotion over actually working and living a life in tune, even one might say, in conversation with the earth. Some may find it a jarring contrast that an ‘ambitious’ person does not seek recognition. This is because (and also in my case) the only person that you really measure yourself up to is yourself—and perhaps more accurately, yourself as a child. Thus the main aspiration is not to be ‘seen’ by the public, but rather to ‘see’ the self. This way, the ego does not overdevelop and you always continue to grow, learn, and give in a reciprocal relationship with life received and cherished as a gift. 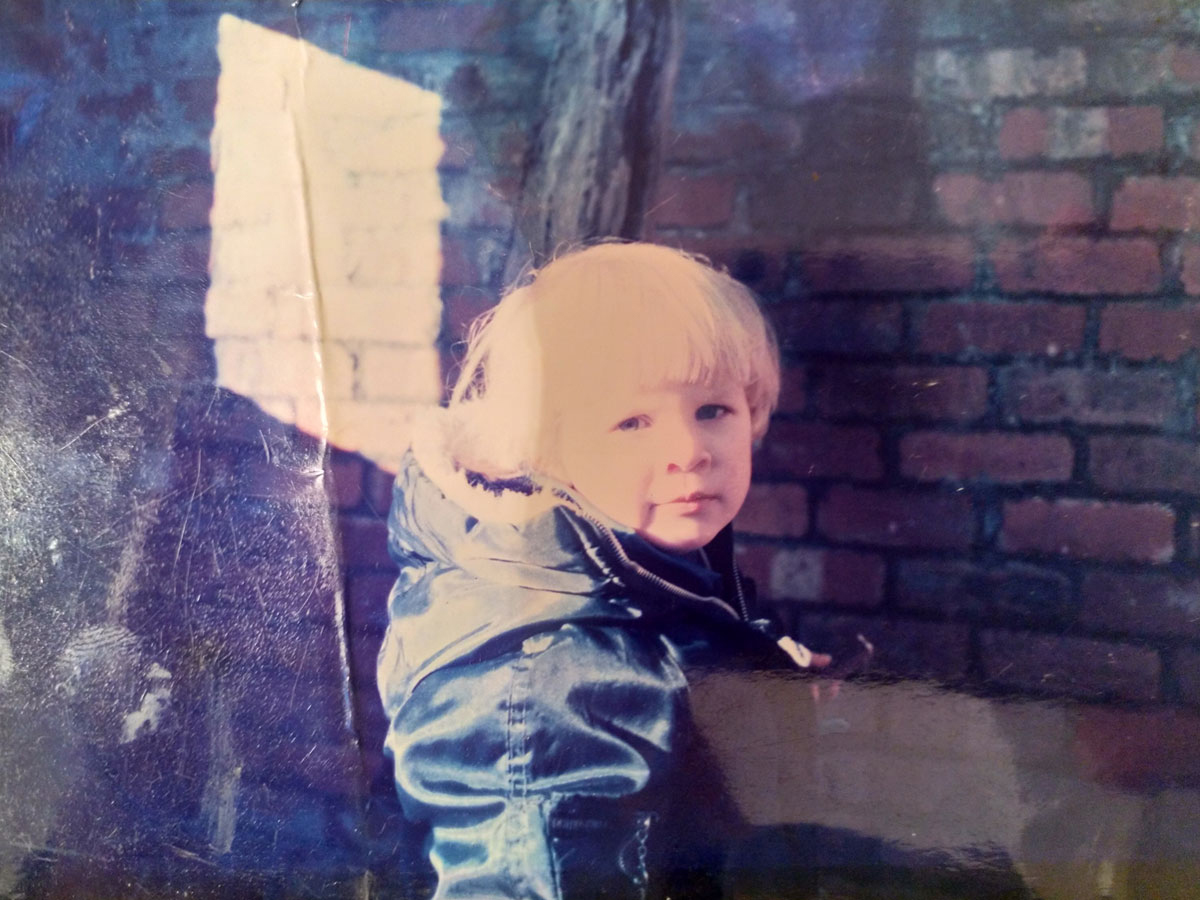 Me as a child. A photograph that I keep by my bedside, alongside pictures of my children, to ensure that I have people to look up to.

When Hurtado finally got her first major show at the age of 98, she was asked if recognition had come too late. She cleverly replied, ‘no, any earlier would have been too soon’. Hurtado had three husbands and four sons over the years so laughs in the interview that she spent a lot of time caring for people as well as making art. Interestingly, both Hurtado and Madge Gill (who did not manage to see her retrospective as she died in the 1960s) had support and ‘recognition’ within their own families. One of Gill’s sons became her lifetime assistant, and one of Hurtado’s sons and her husband, also artists, always acknowledged the power of their mother/wife’s work. Both Hurtado and Gill quote nature as the guiding source of their inspiration, including their experiences of giving birth. Far from diminishing the strength of their artwork, it is nature’s inspiration that results in a heightened understanding of the connectivity of all things.

Similarly, for me, foetuses, infants, children, have become guides, more so than parents entangled in the bustle of the outside world. The child is a guide to the inner world: as they explore their boundless, wondrous, unconscious imagination for the first time, we as parents are warmly invited to return to primary development too. In this way, we re-visit and glean from the phase where our most original ideas and deepest identity lie. 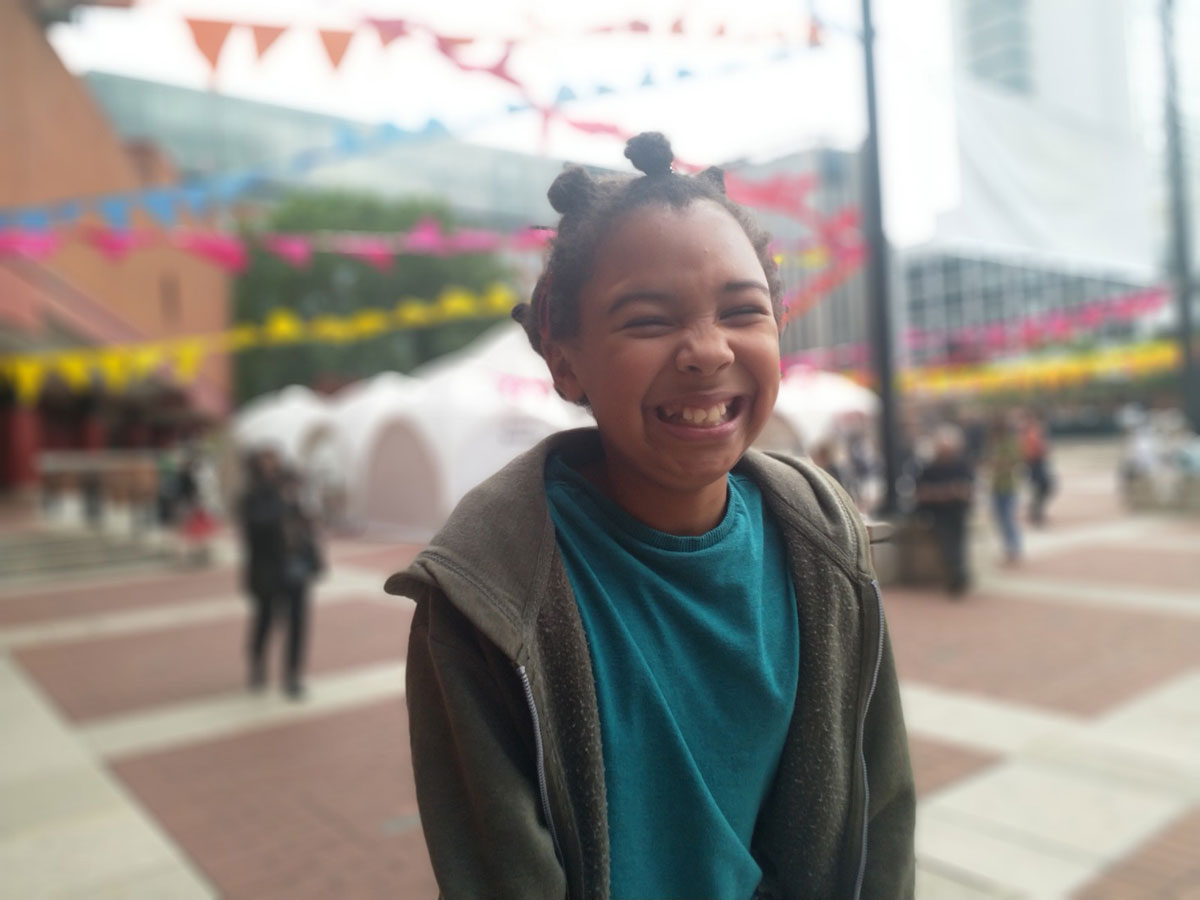 10 years since Frida was born, and 10 years since the birth of Studies in the Maternal, Frida fittingly stands outside of the British Library. With a little more time for the first time in a decade, I find myself back at the library with some regularity. My mind weighs heavy sometimes as it did before the embodied journey of creating three children. But the balance will always be better now, because of my children, and because of my art, which they ‘see’ in me.

This contribution to the 10th anniversary issue of Studies in the Maternal were invited by the editorial team. As such they were internally reviewed by the journal’s editorial team.