Part of a 10 year Anniversary issue this short paper reflects on a 30 year period in the UK where young motherhood moves from being a respectable working class practice into the ‘problem’ of teenage pregnancy, subsequently ‘solved’ and replaced by new categories of concern. Working with her own field notes generated as part of a sociological study of teenage sexuality carried out in Manchester in 1989, the author engages with awkwardness and resistance in the texts and reflects on the ambivalent place of motherhood in the feminist narratives of empowerment that shaped the enquiry.

In this short paper, I say something about the cultural and moral framing of motherhood and how this changes, shaped by welfare, policy and contraceptive regimes and the creative agency of women who live through dynamic and uneven conditions. I write this from the perspective of 2019 and a sociological career of over thirty years that has involved thinking about the female biography and the changing configuration of sex, marriage and birth within it. I am at the life stage where I am finding it interesting and valuable to look back. I have lived (as well as researched) a period of social change. My current project1 involves revisiting the archive of my first piece of professional research – a feminist enquiry into young women’s (hetero)sexual practice and cultures between 1988–90. This was a moment defined in part by the shadow of untreatable HIV/AIDS, but also a popular feminism where girls collectively realised that they would live lives very different to those of their mothers.

In 1988 I was a 23-year-old researcher, conducting interviews with young women aged between 16 and 21 in Manchester. I found these women through a range of entry points including youth clubs, colleges, workplaces and trade unions. Feminist youth workers were important gate-keepers, providing entry into a web of activism across the city. This was how I was introduced to Higher Blackley young mothers group – a network of young women who met regularly and visited schools to talk about their experiences. This was peer education before the term was coined. Here, I want to share and reflect on field notes written at the time, which capture my ‘on the hoof’ reactions to two waves of interviewing: on the 12th April 1989 with three young women and the following week with a further young woman. These are encounters shaped by social class and feminist practices that are both facilitated and derailed by shared identifications as women.

This short note captures something about the extraordinary space that the community workers and women project participants had forged. These are ephemeral public spaces where conversations such as these could take place, allowing researchers such as myself to slide into the talk, capturing fragments and understanding the value of these things being said aloud. My 23 year-old self is clearly intimidated but respectful. I seem to know that there are dangers here. I need to just listen and accept the terms that are set by the speaker. Two phrases are placed in scare quotes ‘make the most of her’ and ‘hard life’ – one a whispered aside, the other left unsaid. Who cares if she is too old for the sample, I am bearing witness. 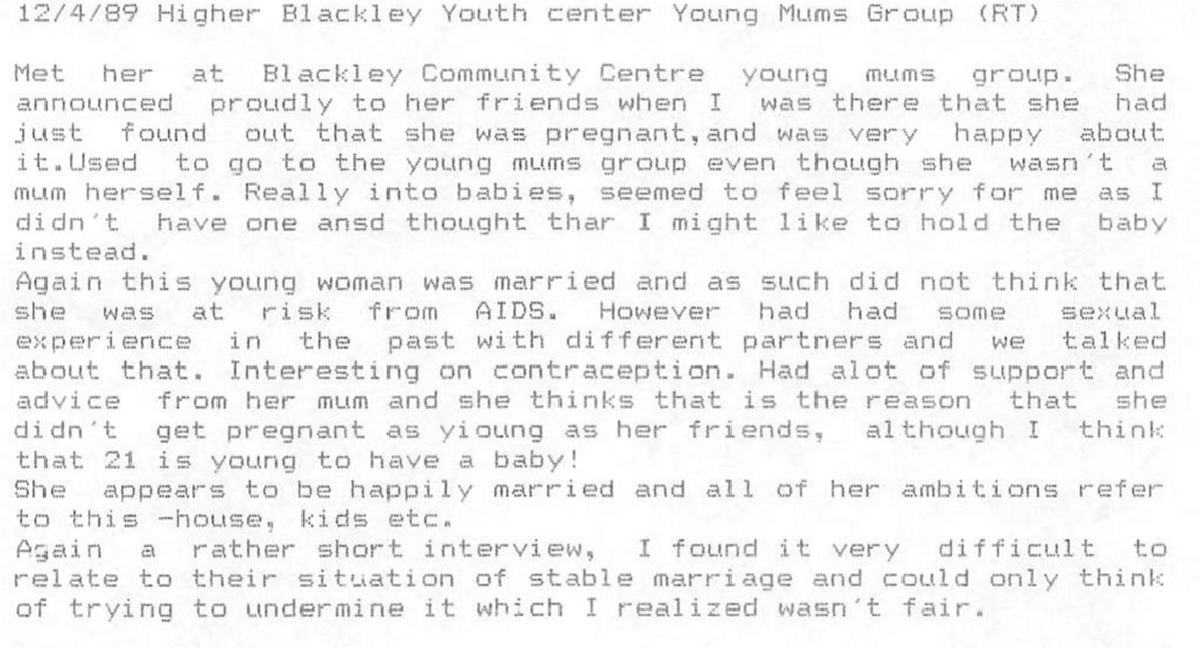 This interview took place on the same day, but from the contextual information I am assuming that it happened earlier. The tone of the field note is ironic presenting the researcher as patronised by missing out on the merits of motherhood. But marriage seems to silence the researcher’s critique: married and mother is a powerful combination, enough to confound an unmarried, ‘ambitious’ female researcher who wants to talk about sex. The two women disagree about 21 being the appropriate age for motherhood. For one of the women, it is too young, (truncating the duration of education and career), for the other it is safely mature. The researcher is bemused by her ‘happily married status’ as if there is nothing to be talked about. Looking back at this forgotten moment I notice the 23-year-old me trying out the notion that she has the power to undermine this young woman’s security, but stepping away from temptation.

An article in Manchester magazine City Life in 1988 captures this important cultural moment when questions of working class respectability were being recalibrated in relation to an emergent category of ‘teenage pregnancy’. ‘Pregnant Thoughts’, written by journalist Penny Anderson, announces new Government data that reveals greater Manchester as having ‘more teenage mothers than almost any other English county’. The article cites Jenny Rothwell, a pregnancy counsellor from a local hospital, who introduces us to what became a familiar framing of young motherhood as ‘an escape route from an unhappy home life’ and a response to there being ‘no stigma to illegitimacy any more…’ Hinting at the unseemly generational proximities of a cycle of deprivation (an idea introduced by Keith Joseph in 1975), she explains that ‘if mum gets caught out then daughter is likely to get caught out as well’.

The ‘young’ mothers in Higher Blackley resisted these kinds of associations, including middle class probing into their sex lives.

In retrospect, it is rather sad that ‘there didn’t seem to be too much to say’. This study involved me talking with an incredibly diverse group of young women, from many different backgrounds and situations. In general, the interviews are marked by an openness and conviviality – with the encounter getting beyond initial discomforts and discovering that there was a great deal that could be said between the two young women. Looking back at these field notes, I see my younger self as out of her depth. Yes I am being held at arms length, but I am also pushing something away as I am required to recognise the boundaries of my feminism and the authority of these young women. Who is it that has nothing to say? Field notes from another interview in the same setting conducted a week later suggest that the researcher has refound her feet as an interviewer, and a sociological frame is re-imposed on the ‘case’ and how she fits within a wider category where there are ‘some married, some alone, some abandoned’. 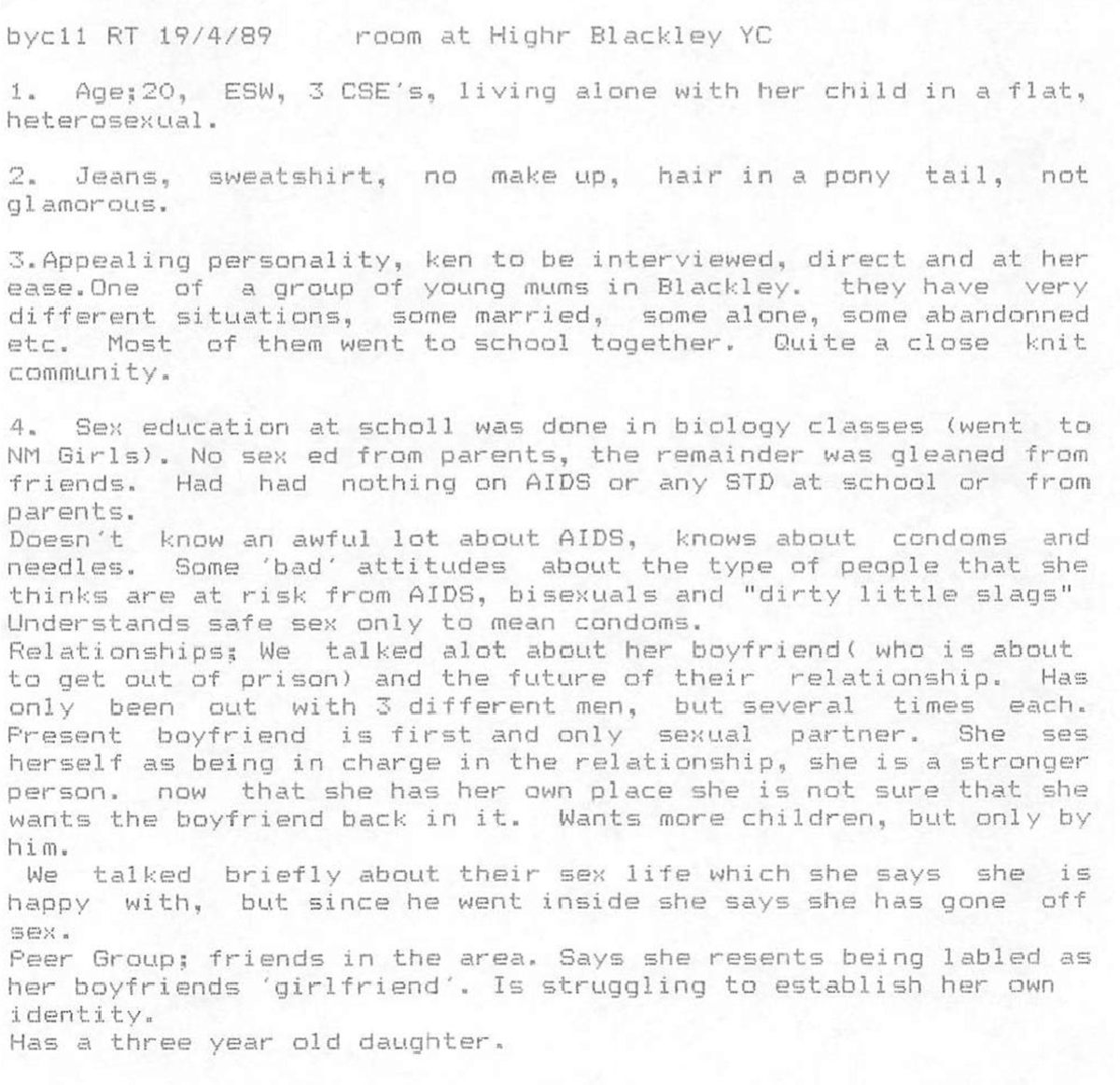 This time scare quotes are placed around the words of the interviewee, presenting the sentiment of ‘dirty little slags’ as part of the work of being respectable. The vulnerability of women caught up with difficult and dangerous men is also made visible. A feminist solidarity emerges around what it might mean to have one’s own identity apart from a man and to have a three-year-old daughter – no easy answers for either party.

These field notes are traces of a moment that has passed, a moment that was complicated and uncomfortable at the time. Looking back from today is still uncomfortable yet revealing in ways that are not simply shaming and/or stigmatising. The Women Risk and AIDS project took place during a cultural period when heterosexuality was being named and contested – in academia but also in the wider culture. This new wave of speaking out about sex took many forms including in-your-face advice in magazines such as Just 17 and the growth of accessible sexual health advice and services for young women. But an older version of the ‘heterosexual contract’ was also being disrupted by the ravages of Thatcherism. The male family wage that had delivered the foundations for a certain kind of social and sexual reproduction evaporated and new opportunities for girls emerged in education and work. The delineation and problematizing of a ‘too-young’ motherhood was part of this story, and feminist activism was complicit in this process—re-enacting and privileging a particular version of classed and racialised feminist freedom. The government-backed Teenage Pregnancy Initiative ran well into the new millennium when ambitious targets to reduce rates of teenage pregnancy were fulfilled — partly as a result of the widespread use of long last contraceptive implants, but also due to deeper cultural changes.2 Freedom from reproduction is an essential yet narrow and compromised vision.

There are many ways to think about these changes. Historians may conceptualise these as part of a process of secularisation, where the hold of religion decreases over time: expressed in the fading stigma of illegitimacy as well as the expansion of marriage to include same-sex partnerships. Changes in the economy are critical as the youth labour market effectively disappears with transitions to adulthood increasingly elongated or brutally truncated for those without parental support. There is also the partially visible story of post-colonialism where respectability derives from a precarious white privilege itself dependent on the systematic destruction of families at a distance through waves of slavery, indentured labour and chain migration. And welfare changes also feature in how parenthood is imagined, enacted and claimed. This is a dynamic landscape providing context for official statistics on birth registration and marriage/civil partnership – the visualisation of which represents something that we struggle to articulate or agree on. 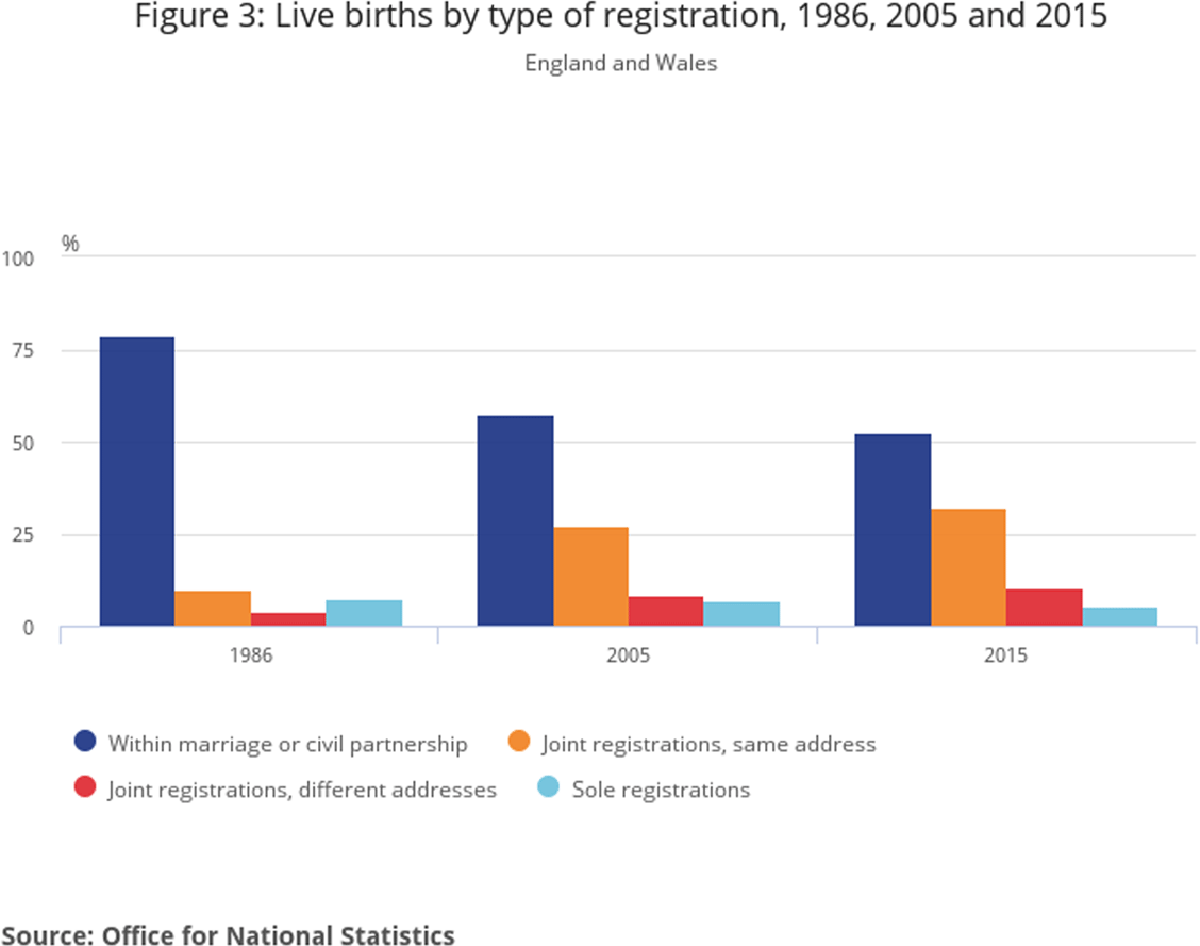 In Manchester, in 2019, provision for young parents has been reduced to just two special housing units: Olivia and Lorna Lodge. Once staffed 24/7 by specialist youth workers who screened visitors and created safe and generative spaces for women and their children, I am told that these units no longer conduct police checks on workers or visitors. The last pregnant schoolgirl units (the name speaks volumes) closed two years ago. Many of the workers were reemployed by the Family Nurse Partnership (an ‘evidence based’ American import supporting young women over the first year of motherhood). This also ended. The vital and extensive network of feminist youth work that saturated Greater Manchester in the 1980s is now a memory; relived and celebrated in exhibitions and events yet no longer delivering services to young people. Sex is not on the agenda for most schools, which are preoccupied with tracking, progression and inclusion. What youth services that do exist are highly targeted on new categories of concern: for example, refugees, those at risk of exploitation, exclusion, and radicalisation.

I was invited to look back over the 10 years since Mamsie was launched – but I have taken the chance to review thirty. This has been a very strange experience, within which my biographical becomes historical, and the past becomes alive in a new way for me. Working with archived materials can be surprising, with documents revealing awkward and unremembered encounters with the potential to disrupt well-worn narratives and suggest paths not taken and nettles yet to grasp. My hope is that in sharing these provocations I am not indulging in nostalgia but using myself as an entry point to open unanticipated connections between then and now. I became a mother at 33. It felt old in 1999. It seems quite young in 2019. I anticipated a huge loss of ‘freedom’ and this was the case. But I was surprised by the expansion of subjectivity and sensuality it brought to me – beyond anything that feminism had prepared me for. Revisiting these field notes I see that I had been warned, and perhaps I did listen. I just found that insight hard to remember.

This contribution to the 10th anniversary issue of Studies in the Maternal were invited by the editorial team. As such they were internally reviewed by the journal’s editorial team.

The Reanimating Data project is funded by the ESRC ES/R009538/1.