Jewish Motherhood/Unmotherhood is an autobiographical, ongoing, multi-media project by artists Sarah Lightman and Emily Steinberg. Jewish Motherhood/Unmotherhood includes paintings, drawings, animated films and comics, and explores the intense sociocultural pressures within the Jewish community surrounding motherhood. Motherhood is one of the central tenets of Jewish life for women. But what if your experience of being a mother is not meaningful or enjoyable? What if you can’t/won’t have children? A culture of expectation, shame and secrecy surround women on all sides of the Jewish motherhood/unmotherhood spectrum. This project explores Sarah’s experiences of having, and Emily’s experience of not having, children.

Motherhood has opened up a world of nuanced feelings for me: a negotiation of generosity and selfishness, of power and helplessness, of merging and separation, of belonging and difference. I found the first few years of my son’s life exhausting and frustrating, and as a result I decided not to have any more children, but I would not want my beautiful four-year-old, Harry, to feel responsible for my feelings. Even now, as I still struggle with balancing the focus of attention between myself and my child, whilst acknowledging my quiet longing for the autonomy of pre-baby days, I want to simultaneously be the best, most supportive and most present mother I can be. In addition, the disbelief, pressure and criticism I receive for my expressions of frustration at parenthood have made me increasingly critical of the Jewish world and community I grew up in, but have also fuelled a determination to find a new, different Jewish community to belong to.

Motherhood has also deepened my understanding of feminisms, and as a result paintings I used to love to view in galleries I can now no longer stomach. I have always been drawn to early religious images, and, during my time at The Slade I won a travel award to draw Biblical Art in Italy. Recently, I have been trawling galleries for art historical examples to see my own life legitimised in art, and my feelings mirrored in works that I view. Although I loved to draw Madonna and Child images in the past, after having Harry my maelstrom of maternal experience has meant I have found these same images too idealised: Mary’s birthing seems excessively easy, she never responds to her child with anger or frustration, and her clothes are perfect and not covered in vomit, breast milk, food and other detritus. However, I did still feel a kinship with a series of Byzantine paintings, Glykophilousa Madonnas, where the Virgin is often sad – her emotions attributed to knowing of her son’s future crucifixion. Often her son is caressing her cheek in these images, almost mothering her with tenderness and affection in the present, at the exact moment Mary is anticipating future pain and loss, and her powerlessness to protect her child. 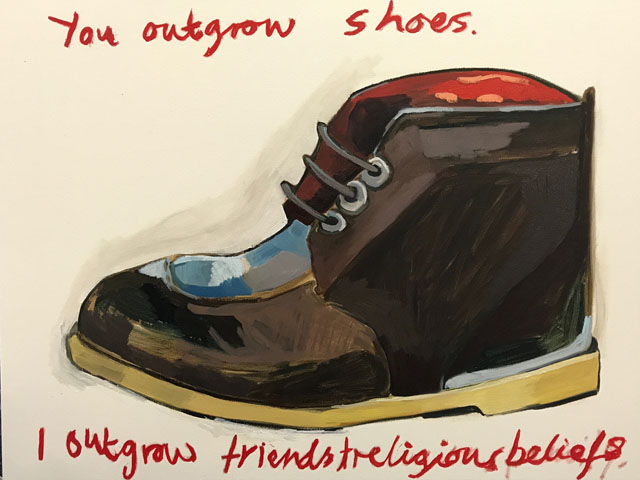 I have reinterpreted and contemporised Mary’s sadness into a series of self-portraits in charcoal that also incorporate my son’s new favourite toy, his Brio train set. This train set has spread itself all around our home, through the kitchen into the hall, and under the dining room table, but my son is often frustrated when pieces do not fit together. In particular, it took him a few weeks to work out how to construct the bridge. As is the case with many four-year-olds, Harry is impatient, and these delays to his construction work made him desperate, and he urgently demanded my help. I made a series of drawings about these moments, entitled Madonna of the Broken Bridge, where I become aware I cannot always fix the bridges that will break in his life. 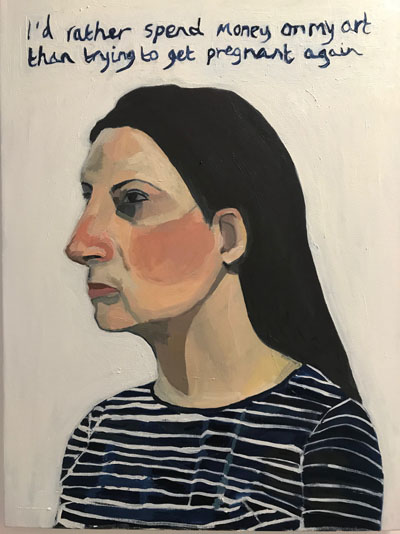 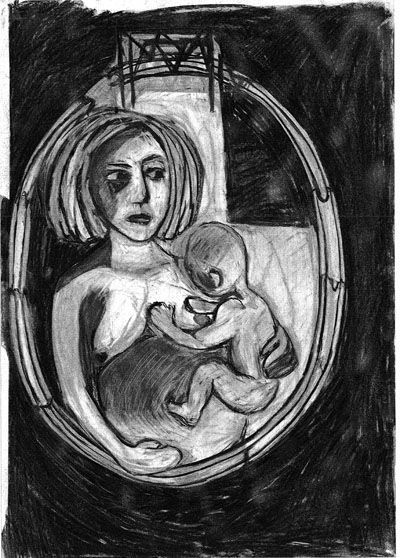 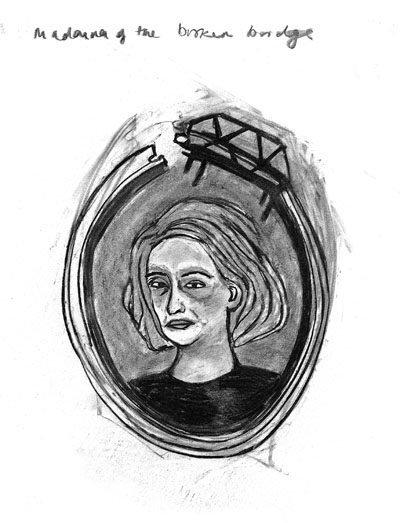 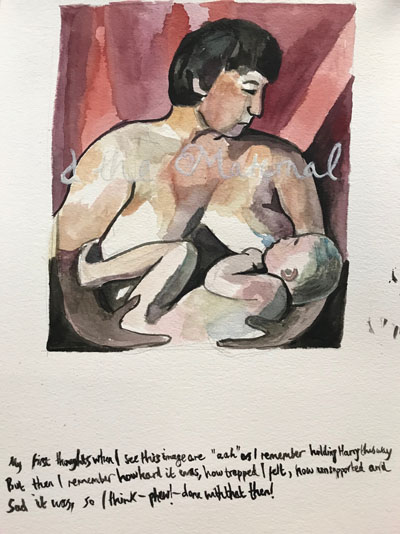 Book Cover of Feminist Art of the Maternal, Watercolour on paper, 2017.

Not being able to be a mother was a crushing blow. I grew up a member of a large Jewish, rambling, extremely close, chaotic and loving tribe; the youngest of four, the only girl, surrounded by love and affection from the moment I was born. Indeed, I set out to replicate where I came from. It was what I knew, and it was lovely. Also, growing up Jewish, born 20 years after the end of World War II, there was a certain unspoken obligation that we, the next generation, would replace those lost in the Shoah. Perhaps it was my own interpretation of events, but nonetheless it was a heavy load to carry.

And then, a series of life events: depression, social anxiety, my mother’s Dementia brought me to the cusp of 40, single, even more anxious and desperately wanting a child. Marrying at 4I, I immediately slipped into the world of artificial reproduction. At first it seemed like a no brainer… of course I would get pregnant… I had an irrational belief that the Miracles O’ Science, which we had been told about over and over, were a fail safe. We were the first generation of women who could do everything we wanted, when we wanted. But nothing happened. The injections and probes, the piles of medications, became daily occurrences and so became almost mundane. Lying on my back and shooting into my stomach became no big deal except it was a big deal. All procedures were accompanied by the irrational, fervent hope that it was FOR something. In the end it was for naught. 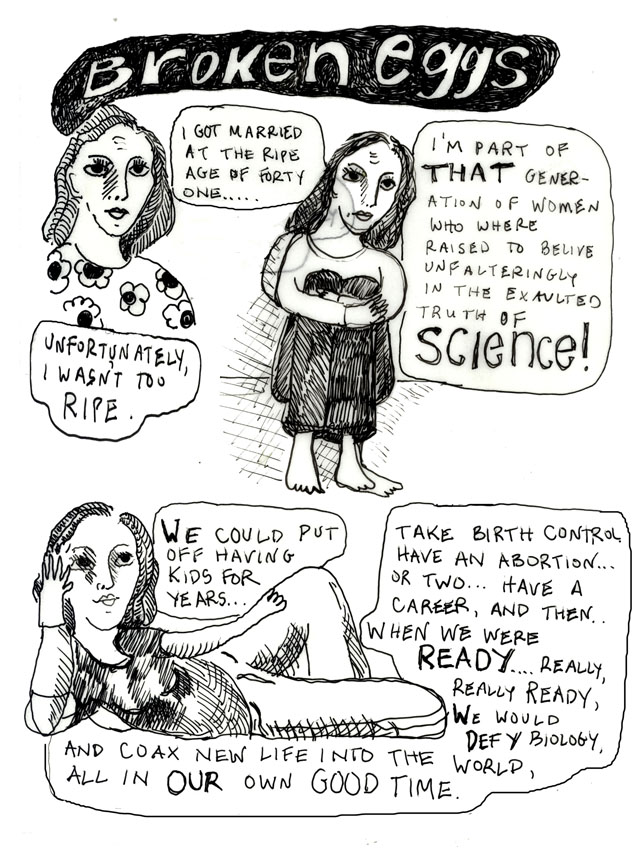 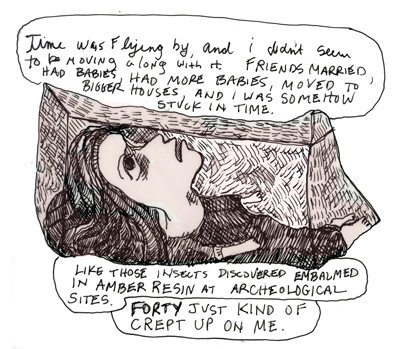 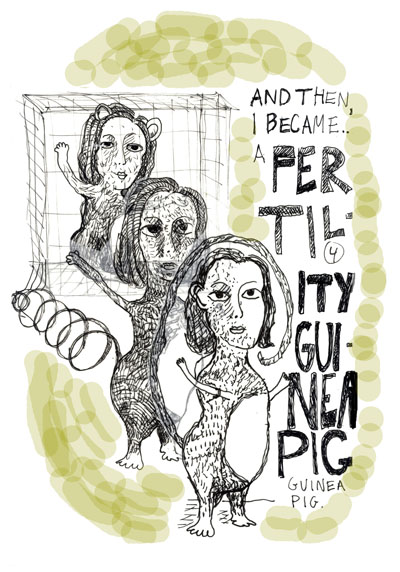 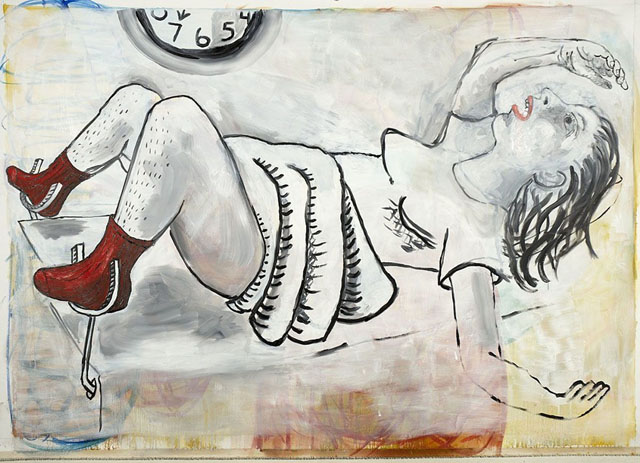 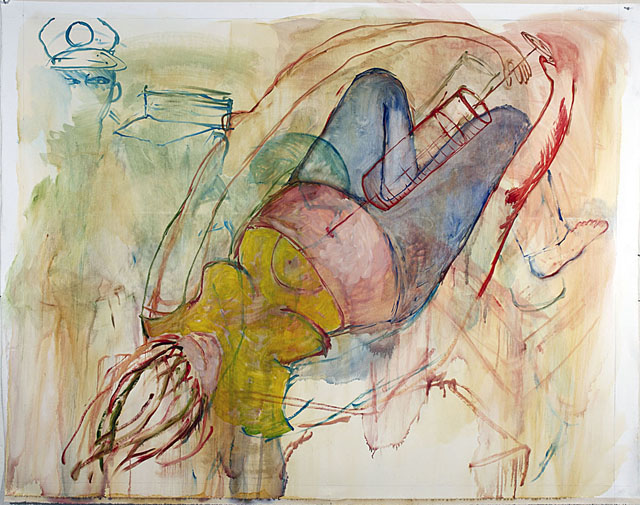 In Broken Eggs, 2014, a 67 page visual narrative, and a series of oil paintings completed around the same time, I wrestle with the emotional tumbling and unraveling and the ultimate acceptance of an outcome that had once seemed unfathomable. The paintings are life size and depict specific moments in the journey. The images in the visual narrative are disjointed and ragged; sometimes there’s a bit of smudged colour. sometimes drawings have been laid over one another creating a visually dizzying and chaotic double image. The text, varying in size, script and intensity loudly channels my incredulous and increasingly pissed inner monologue.

The authors have no competing interests to declare.