Cultural ReProducers is an ongoing creative platform initiated in 2012 in collaboration with an evolving group of artists, critics, and curators raising young children. As a community Cultural ReProducers explore the intersection of artmaking and family life through a diverse range of projects that include an online resource, a childcare-supported art event series, a speculative certification program, and a risographed zine of experiments in artist-parenthood. These activities propose new models for institutional support while building networks of exchange, visibility, and dialogue to realize our collective needs and desires.

To be a vital cultural creator and an engaged parent need not be mutually exclusive things. Despite this, many artists (especially women) find the art world closed to them once they have children. Motherhood in the arts is by no means a new phenomenon, but for those who defy the advice of mentors and gallerists by deciding to raise children while also pursuing a career in the arts, it can be hard to know how to proceed. While many well-known artists have managed to be engaged parents while pursuing successful careers, mention of this creative balancing act is largely absent from critical discourse.

Cultural ReProducers is a growing community and a creative platform supporting cultural workers who are also working it out as parents. Formed in late 2012, it is a project I often run myself but could not sustain without the dedication and creativity of many collaborators, in particular artist Selina Trepp, artist/scholar Chrissy LaMaster, and independent curator Thea Liberty Nichols. Our activities to date include a series of childcare-supported events, a small-press zine of manifestos and experiments, a multimedia exhibition, a remote reading group, an institutional toolkit, and an extensive website of interviews, residency reports, critical writing and other resources.

On a practical level, one factor that makes it difficult for artist-parents of young children to participate in the art world is basic scheduling. The art openings, lectures, and performances where dialogue and professional connections are made take place almost exclusively on Friday nights, far from residential areas, just as many babies are in the midst of some sort of dinner/bedtime ritual that is completely possible to disrupt, but would frankly require something pretty exceptional to make that worthwhile. It is a conflict that those without children can’t quite fathom.

As an informal group of artist-parents based in Chicago, our first response was to organize gatherings in our homes and nearby playgrounds to connect with other artists, curators, and critics beyond the gallery events we now found it difficult to attend (Fig. 1). These initial meetings drew more participants than we could comfortably fit in our apartments, but the presence of so many small children with needs of their own made it hard to sustain adult conversation. Nonetheless, connections were made and plans were hatched to continue these conversations in other ways: on the phone, over the internet, and after our kids were asleep. 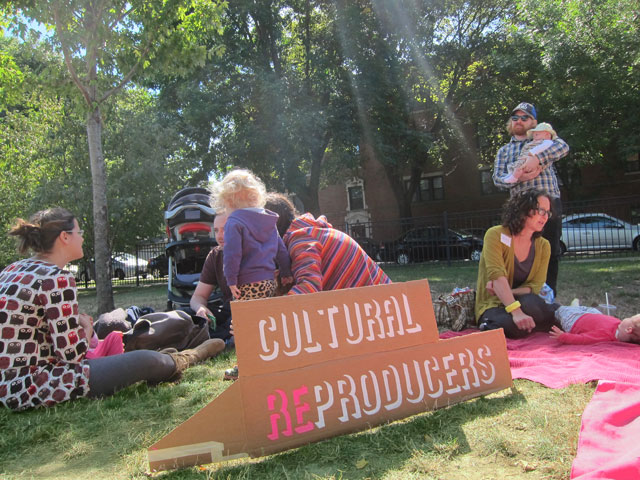 In the meantime I felt an urgency to expand this conversation and to discuss a diversity of approaches to making art and raising children. My own decision to become an artist-mother had been fraught with anxiety as I struggled to find role models. Of course it’s not that they don’t exist, but since many artists have been understandably private about their roles as mothers it can be hard to find much information. Unfortunately this has only reinforced misperceptions about the viability of art and motherhood, and so we find ourselves reinventing the wheel again and again.

The Cultural ReProducers website launched just a few weeks after our first meeting. It operates as a flexible curatorial venue, highlighting the diverse work of active cultural workers raising children while also discussing their challenges and strategies for balancing parenthood with artistic practice and career. Online curation has its advantages, among them low rent, international visibility, and the ability to create an ongoing archive that includes both artists who incorporate parenthood into their studio practices as well as those who adamantly do not. This means we can feature the wonderfully frank and playful parental experiments of Lenka Clayton alongside the work of abstract conceptual painter Michelle Grabner, one of the curators of the 2014 Whitney Biennial, who has run a gallery in her suburban backyard for more than a decade.

The site also features Residency Reports, which address the exclusion of parents from artist and writing residency programs. These reports share information about how artist-parents navigate the residency experience with (and sometimes without) their families along. Resources include my own experience dividing residency time between two artist-parents, choreographer Sarah Neville’s DIY approach to participating as a Family-in-Residence through multiple programs, and writer Debbie Urbanski’s plan for leaving the kids at home.

Creating community resolves some of the isolation many new parents feel, but to regain access to the broader cultural dialogue one must address how institutions structure the possibility of participation. Cultural ReProducers’ next project focused on four institutional barriers: event timing, childcare, admission fees, and artist honorarium.

Supported by a grant from the Propeller Fund, artist Selina Trepp and I developed the Cultural ReProducers Childcare-Supported Event Series. We reached out to galleries and museums throughout the city of Chicago – Gallery 400, the Art Institute of Chicago, the DePaul Museum of Art, and Glass Curtain Gallery – to curate a series of artist lectures and generative workshops that were accessible to parents while also attracting a general art audience. Our goals were twofold: to give parents and their kids the chance to participate as critical members of the arts community, and to inspire cultural institutions to better serve artists and audiences, providing positive models for future programming.

Each of these events was organized on a modest budget and included three components:

*Weekend Morning Start Times: Naptime for children can make it complicated to leave the house, and often doubles as critical studio time for parents. Most galleries and museums don’t open before 11am on weekends, a fact we had never thought much about before having small children. We worked with institutions to experiment with timing, opening the doors at least one hour earlier for our events.

*On-Site Childcare: After the relative chaos of our apartment gatherings, we wanted parents to have the option to participate without distraction. If gyms and IKEAs can offer on-site childcare, why not cultural centers? It wasn’t difficult to secure an unused meeting room at each venue that could be transformed into a temporary crèche. We organized a system for pre-registration and check-in, developed a safety waiver, and hired childcare providers to develop activities related to the events adults would be attending down the hall. Parents were also welcome to keep children with them if they wanted to, of course. We hosted all-ages receptions afterwards, allowing everyone to mingle once children were picked up.

*Money For (Not From) Artists: Artists are the most under/unpaid workers in the arts economy, and in the US it is common for artists to present their work without compensation. For parents, the equation of time = money is literal, since focused time in the studio, at an art event, or just working to earn an income adds up to hours of childcare expenses. In proposing a model for a truly artist- and family-friendly event structure it was important that all presenting artists were paid an honorarium for their labor. We worked with institutions to eliminate fees both for admission and on-site childcare for these events.

Cultural ReProducers’ activities began to attract interest from arts institutions, many of them run by cultural producers raising their own families. Just as Thea Liberty Nichols and I had begun discussing possibilities for a curatorial project, Cultural ReProducers was approached by Chicago’s Glass Curtain Gallery to propose an exhibition for their 2,200 square foot space. The result was Division of Labor, a multimedia show focusing on the links between the aesthetics, materiality and meaning of an artist’s work in relation to parenthood while also revealing unexpected moments at the intersection of artmaking and family life. Rather than depicting parenthood literally, the work in Division of Labor revealed the impact of family life through each artist’s practice. We included the vibrant abstractions of Candida Alvarez, first painted on dinner napkins when she was a housebound young mother; John Preus’s Proposal for Charter School Swingset made from salvaged public school desks; the Nap Animations drawn by Selina Trepp using the indeterminate spaces of her daughter’s sleep schedule as creative constraint; and a glittering sculpture by Heather Mekkelson, made from the heavy rocks her young daughter collected as daily gifts. We felt it was critical to include the work of fathers as well as mothers in the exhibition, both to normalize the presence of men as caregivers and to open up a more complex conversation about the complicated double standards in critical success and family-themed content. The show attracted a steady stream of visitors and received critical acclaim from the Chicago Tribune and Artforum.com

Making it What We Need

In conjunction with the Division of Labor exhibition, Cultural ReProducers organized the final chapter in our Childcare-Supported Event Series. At this point it was clear to us that the series must have a finite conclusion. We were ready to get back to our studios and let the project stand as a viable model, putting the onus on institutions rather than artists. At the same time we found our creative community hungry for more, and wanted to include and empower them in the process.

We decided to bring together artists and institutions through Making It What We Need, a generative workshop that invited participants to collaboratively design new systems for participation (Fig. 2). We reached out to artist parents, art critics, and administrators from residency programs and galleries – many of whom had never met each other – to work through a process of identifying needs and planning concrete steps to get there. Working in small groups, we generated a range of creative goals that included artist childcare co-ops and studio buildings with room for on-site daycare, critique and reading groups that meet online after our kids are in bed, guerrilla marketing campaigns to address the assumptions and expectations about artist-mothers, and a Cultural ReProducers Certification process to guide institutions in providing access to parents in the arts. Some of these projects are now underway. 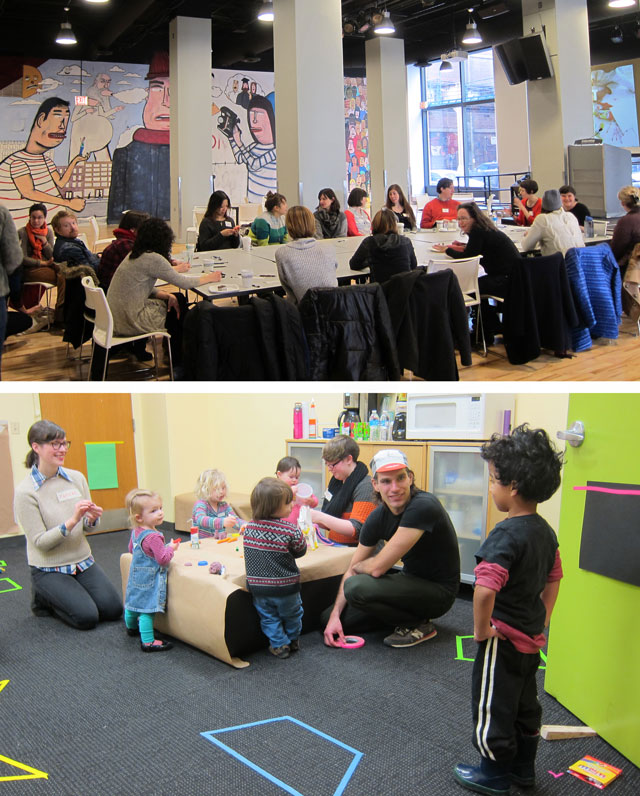 “Making it What We Need,” a generative workshop focusing on the needs of artist-parents, with free, on-site childcare. photos: Andrew Yang.

Cultural ReProducers continues to evolve as a community and as a project. Last year we invited artists throughout Chicago to design their own Cultural ReProducers events, challenging the existing model of “family programming” typically designed for kids with parents along. While we value family programs, we wanted events supporting parents as valid participants without segregation from the rest of the art community. From intergenerational artist talks and performative art fairs to a shandy and lemonade enhanced breakdancing workshop, these artist-run projects brought together artists and audiences from across the city to rethink what truly all-ages programming looks like.

Cultural ReProducers now includes an active and supportive online community through a closed discussion group on Facebook that includes nearly 300 international members. We have just begun an online reading group organized by Chrissy LaMaster that will create space for critical dialogue from home. Drawing from our experience in organizing the Childcare-Supported Event Series, we are currently working on a certification program and toolkit that will allow artist-parents to be paid as creative consultants to institutions.

As the art world expands to include models for creative practice beyond the dominant template of the singular genius working alone, we recognize artist-parenthood as one of many possible options, and search for creative strategies to make it work. Instead of isolation we seek networks of support, visibility, and dialogue. Working together to realize our collective needs and desires we will expand the field to make possible new forms and ideas.

Christa Donner (School of the Art Institute of Chicago)