My daughter’s school class-room assistant loves to knit. Last December she said that she had knitted my daughter a cardigan, as she knew that I never would. On Christmas Eve her husband delivered it, as he handed me the package he said two words, not “Happy Christmas” but “Bad Mother”. The exhibition of this piece, entitled Bad Mother (2013), elicited another surprising remark. A male visitor congratulated me on what he saw as a “very honest admission”. My identity as a mother and the tumultuous emotions I have felt are the driving force behind an on-going series of knitted works.

Making, in particular knitting, has become my way of interpreting, communicating and coming to terms with, the world that we inhabit. It sits between me and my internal world, and the physical world around me, like some form of comfort or rather discomfort blanket.

In IT SUCKS (Figures 1 and 2), I subverted the traditional hand knitted Shetland Lace christening shawl to communicate the very mixed feelings, not all together positive, that I had upon the birth of my daughter and becoming a new mother. Knitting has been a source of income for women in Shetland for many years and continues to be so for some today. In the past when the men were at sea, it was up to the women to run the croft. Any free time was spent in knitting with the items made, most commonly elaborately patterned jumpers or lace shawls, either used as essential clothing for the family or to be sold as a way of boosting the meager family income. The recent renewed interest in knitting has not come from financial necessity and is associated with relaxation and fun. Having to knit for a living is not relaxing or fun, like my experience of new motherhood, and my new baby, it sucks. 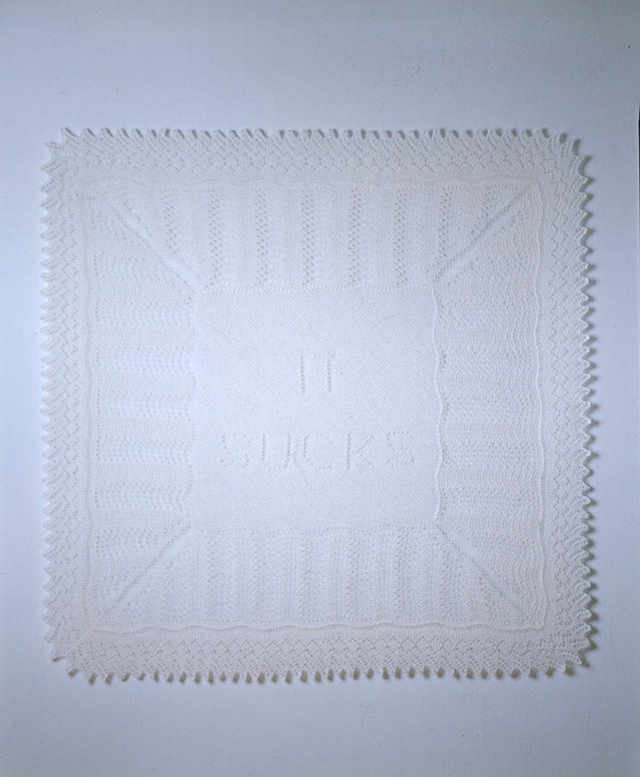 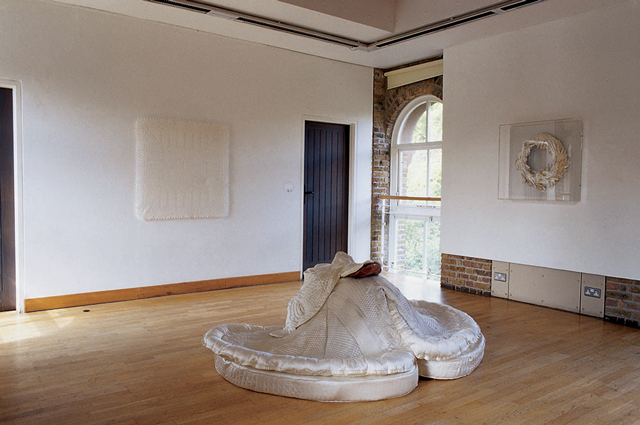 I have knitted since I was a teenager, studied knitted textiles at both undergraduate and masters level, and have taught on knitted textiles programmes ever since graduation. Knitting has been a key part of my life for nearly forty years. However I was not conscious of how far it had permeated me until after my daughter was born. I suffered from post-natal depression, feeling completely alienated and alone in my new role. In desperation I turned to my knitting. Whilst working from a commercial pattern for a pair of baby’s pram-trousers, or breechettes as the pattern refers to them, I felt fine, deriving a huge amount of reassurance from the movements my hands made as the work grew. This was something from the time before motherhood that could be my companion during the early, difficult days of motherhood. The familiar, to counterbalance the unfamiliar.

Knitting has long held associations with practical function, the time-consuming, loving production of cosy garments to keep us warm and enveloped in love. The knitting of clothes, blankets or shawls for newborn babies is a long-standing tradition, and if you are a knitter, an expectation. When I was pregnant I was continually being asked what I had knitted my baby. It was assumed that she would have a wonderful array of knitted items to wear. I had knitted her nothing. I wanted to, it’s just that I wanted to knit in my studio more.

In Bad Mother (Figure 4) I have filled an industrially knitted body with builder’s expanding foam, severed an arm from it using a bread-knife, pushed a bunch of broken and bent knitting needles into the end of the arm, voodoo style, and embellished it with red lurex tubular knitting spelling out the words BAD MOTHER. The ‘O’ of mother has been turned into a sequined eye crying crystal tears. The phrase BAD MOTHER came from something that was said to me at Christmas. One of my daughter’s school classroom assistants loves to knit. Last December she said that she would knit my daughter a cardigan as she knew that I never would. On Christmas Eve her husband brought it over, as he handed me the package he said two words, not ‘Happy Christmas’ but ‘Bad mother.’ When exhibiting it through the Crafts Council’s exhibition, COLLECT, at the Saatchi Gallery, London, UK, six months later, a man congratulated me on what he saw as a ‘very honest admission.’ 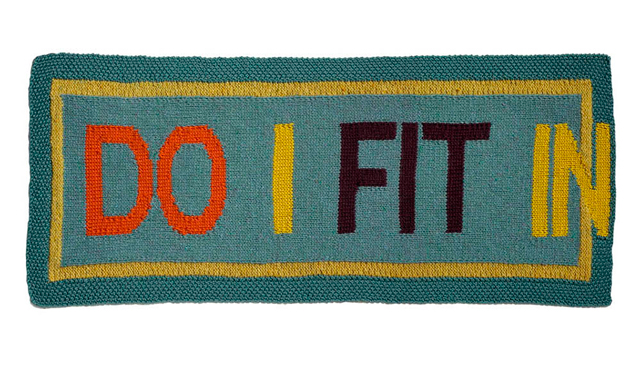 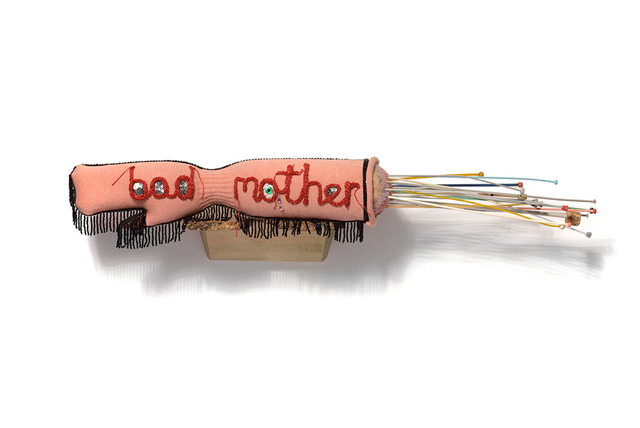 In this ink drawing (Figure 6) I communicate the intense emotional and physical relationship that I was having with my baby daughter. She completely consumed me, filling all my thoughts. If she was anywhere near me I couldn’t concentrate on anything but the simplest of tasks. She completely filled my head. I can still only concentrate fully in my studio, which is now at home, if she is not there, or is definitely asleep. Struggling with these on going feelings I have been reassured by an interview with the artist, Phyllida Barlow1, a mother of five. Many years ago when she was lecturing to students she was asked, ‘What’s more important to you: being a mother, or being an artist?’ She replied, ‘Being a mother.’ The students recoiled in horror at the prioritisation of motherhood over artist. Barlow goes on to say.

It isn’t about a choice, the two are actually reciprocal, although an impossible combination, and I wouldn’t necessarily recommend it to anyone, because the split is a very cruel schism; they’re both intensely creative processes, but they stand in absolute opposition to each other. One is selfish and the other has to be selfless. The mix is not good.

I’M SO ANGRY, 2005, hand knitted wool, 960 × 340 mm. Knitted for me by Jean Arkell. In the collection of KODE – Kunstmuseene i Bergen, Norway. Photograph: Douglas Atfield. 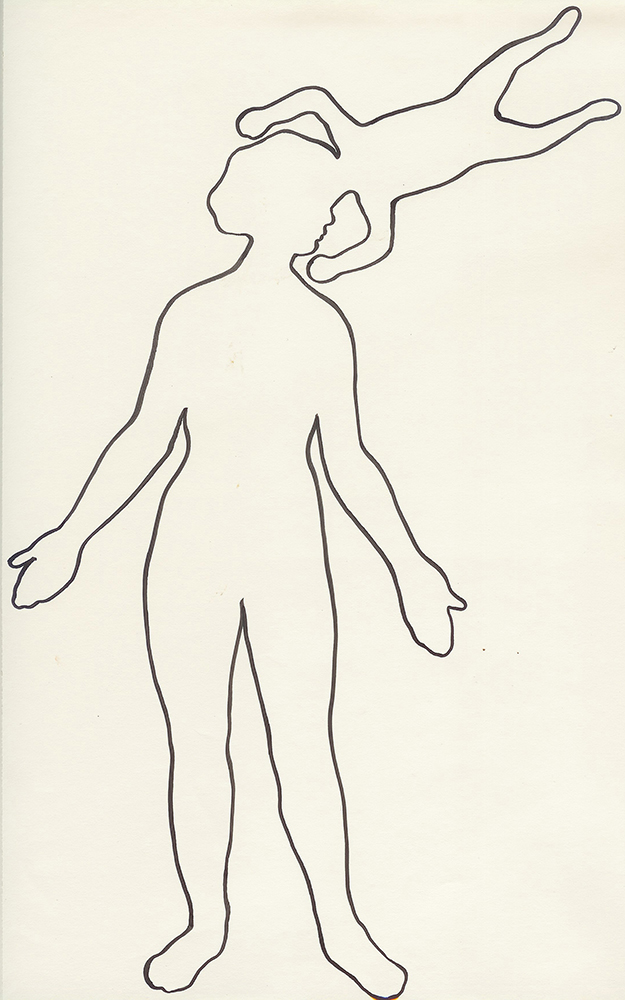 The ink drawing was translated into a material work, Mad Mother (Figure 7 and 8), again using one of my industrially knitted bodies. I unpicked the machine knitting at the top of the head, carefully picked up the now loose stitches and hand knitted the baby’s body from them. I adopted a new method of working, instead of writing a pattern for the baby then knitting it I simply drew the baby’s body out the size that I wanted it and started knitting. Every couple of rows I held the knitting against the drawing and shaped accordingly. This was the method that the feminist artist, Su Richardson, used when she was making her iconic crocheted works in the mid 1970’s. Richardson found this method enabled her to make work whilst simultaneously caring for her young son. However my head is still full. I continue to wait until my daughter is not present. My knitting belongs firmly in the studio, not to be muddled into mundane everyday domestic activities. 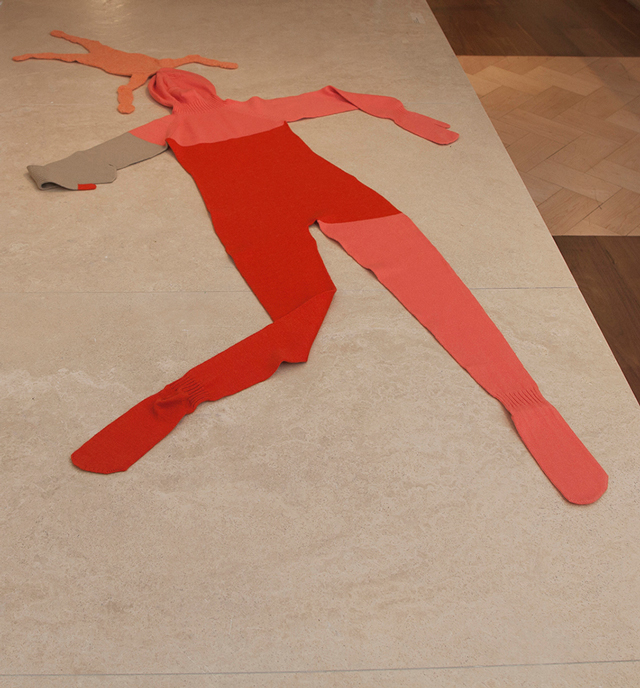 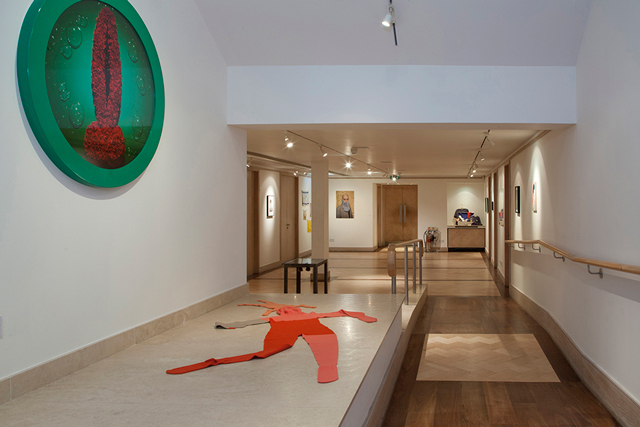 Mad Mother was exhibited along with Bad Mother in Liberties, an exhibition curated by the curatorial partnership, Day + Gluckman, for the Collyer Bristow Gallery, London, UK, of contemporary women’s art reflecting the changes in art practice within the context of sexual and gender equality since the introduction of the Sex Discrimination Act (1975) in the UK.