‘50 things my son doesn’t need me for’ (2011) explores the changing relationship between the artist and her son, and speaks about issues of loss. The artist’s interest is with the details and familiarity of everyday events. She focuses on unremarkable maternal experiences of daily life that relate to a particular time but which articulate both the extraordinary and the momentous, and represent the more fundamental changes that will inevitably occur as her son grows older. In the video, the artist is seen writing on a blackboard, and then erasing, 50 things that her son no longer needs her for. The video draws on the temporary nature of the items on the list; how quickly those things disappear. The artist focuses on the notion of loss as experienced from the mother’s perspective. The work explores feelings of maternal ambivalence, trapped in monotony, and the inherent contradictions with positive memories of closeness with her son.

“…from the moment I gave birth, my motherhood has been a slow and constant process of letting go… a little bit of loss every day as my children become less a part of my body and more independent beings.”

Ellen McMahon’s quote encapsulates a central part of my maternal experience, which has in turn, informed my artistic practice. Conveying my maternal subjectivity, while simultaneously striving to articulate universal messages about relationships between mothers and children, my work has been governed by issues of aging, change, loss and separation.

“50 things my son doesn’t need me for” (https://vimeo.com/184342323) (digital video, 25 mins) explores the undercurrents and complexities of the mother/child relationship, and its evolution over time. The work also examines feelings of maternal ambivalence, trapped in monotony, and the inherent contradictions with positive memories of closeness with my son (Figure 1). 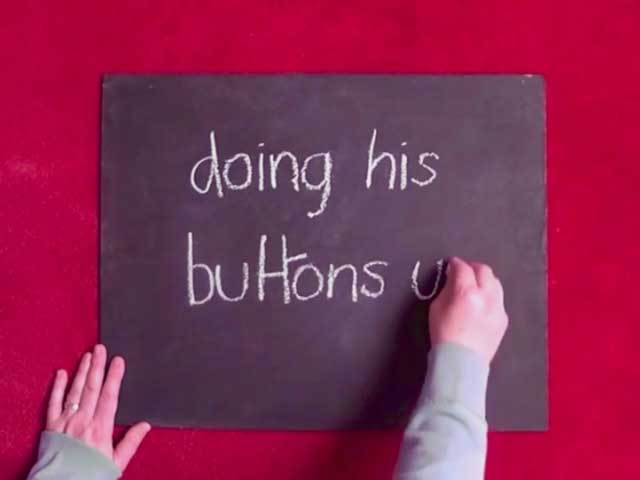 Dominated by the fragility of time passing, my concerns (over the past ten years) have centred on the changing relationship between us, and in particular the ordinary yet intimate moments that we share. These seemingly minor events gradually became more significant to me. Speaking of a particular time, they communicate something more extraordinary and momentous, and symbolize the more fundamental changes that will inevitably occur as he grows older. As mementos of growth and change, quotidian events represent the poignancy of a weakening bond and my resulting feelings of loss and separation.

Prompted by the unexpected absence of peas that I had previously and regularly been picking up from the floor, and the subsequent realisation that this absence symbolised an end to a particular stage of our relationship, I began to note and record other things for which I was no longer needed.

Melancholy enveloped me with the near daily (and actual) documentation of these relentless changes on an ever-expanding list. Momentum gathered while a rhythm developed, and this document began to reflect the disordered and complicated nature of a small child’s everyday life.

The list subsequently formed the basis for this extended video work in which I am seen laboriously chalking on a blackboard, and then erasing one-by-one, each of the 50 things my son doesn’t need me for.

The work is filmed from my perspective as the list’s author, and as the artist and mother, and the video is viewed through my eyes. The intentionally close-cropped and restricted space of the frame aims to create a sense of intimacy, and references the constant surveillance of a mother’s gaze (Figure 2). 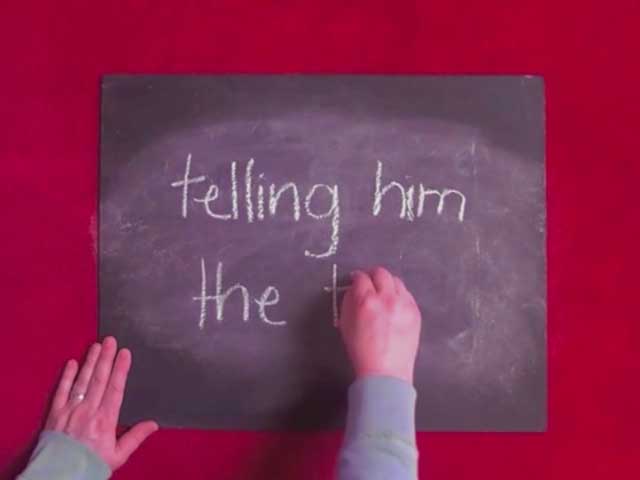 Maintaining a personal narrative while speaking more widely of universal concerns, the video records my hands as they inscribe each word, acting as visible signifiers; a tangible yet unidentifiable distillation of the mother. Artist and film-maker Catherine Elwes’s video, ‘With Child’ uses close-up camera angles which magnify moments of intimacy, reinforcing the notion that you are ‘there but not there’, (Meigh-Andrews 2006, p. 175). To the viewer, my hands are anonymous; yet connect an emotional association with the physical presence of the mother.

After meticulously and purposefully drawing each phrase, one by one, the words are erased, and the chalk dust accumulates (Figure 3). The words disappear as easily and as quickly as my son’s needs for me seem to. The marks left behind quickly become memories of what was once a part of our relationship. The video draws on the temporary nature of the items on the list; conveying a sense of impermanence as aspects of our relationship fade away and the intimacy of shared moments disappear. 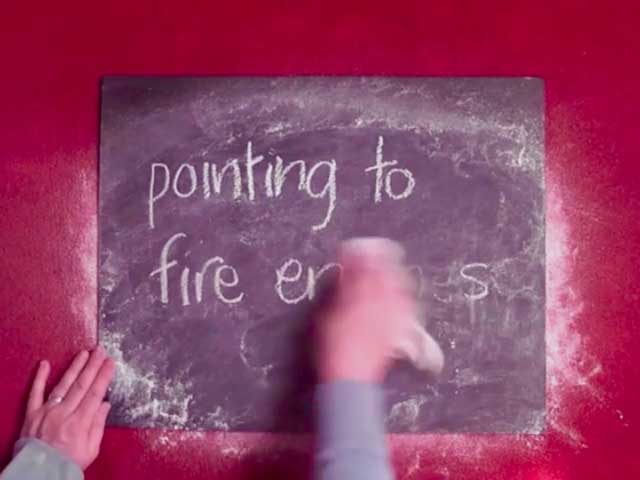 In her book, Torn in Two (2005, p. 121), Rozika Parker examines the subject of mother/child separation and the concept of maternal ambivalence. She discusses the notion of the maternal ideal and how ‘mother/child oneness’ continues to be celebrated. Parker contends that despite this, ‘the cardinal sin is nevertheless considered to be a failure to separate’.

From my perspective, my son was getting older; and the video notably highlights the bittersweet transition between dependence and independence. Liss (2009, p. 59) describes these moments of growing independence as ‘epiphanies’, although also comments that they often pass without acknowledgement. For me, documenting these visceral and significant moments was imperative, and was fostered not only by my desire to remember and portray my related feelings of loss, but also by the fact that together, they recreate my experience of motherhood: an overwhelming yet rewarding tide of events and actions. Together, the rhythmic sounds of the chalking and erasing mirror the mundane and repetitive nature of the tasks being documented, acknowledging feelings of maternal ambivalence.

Reflecting on the characteristic features of the films created by director and artist Chantal Akerman, and in particular her focus on day-to-day routines, she succeeds in presenting both a clear and real narrative. This, together with the weight she places on time and duration, has influenced the way I approached the making of 50 things my son doesn’t need me for. As artist, mother and observer, using minimal details from the everyday, I aim to portray a multi-layered yet simple perspective, as well as an honest and insightful sense of our relationship. The extended length of the video, together with its repetition and slow pace, communicate the prolonged and drawn-out process of separating from a child.

Contextually, the content and subject of the work is not about my son’s development; my choice of what to record was not what he can do now because he is older and learning, but comprises of experiences and activities that I had previously done for him as opposed to things I had done with him.

The items on the list are significant and important emotionally, and reveal our life in minute detail; a candid portrayal of our shared experiences, routines and rituals, overlaid with my subjective experience as his mother. Although seemingly general and applicable to most mother/child relationships, the list documents specific and distinctive aspects of my son’s life, and consequently the film can be read autobiographically as an account of a young child.

In the final shot (Figure 4), the board is removed from the frame, revealing the chalk dust left behind. Echoing the physical vestiges of bereavement, this residue acts as a memorial to the absent closeness of our relationship, and the space where the board once lay remains visible as a metaphor of loss. 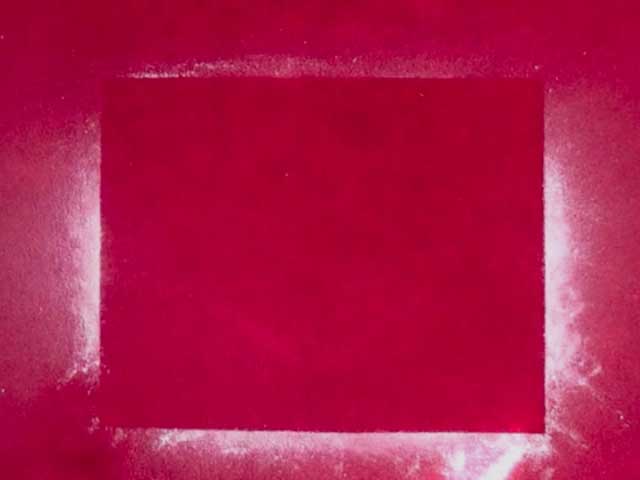 This work is the foundation of an on-going body of work, and has underpinned a series of pieces using video, photography and text to explore the impermanence of the phases of my maternal relationship, and the irreversibility of change.

A Liss, (2009).  Feminist Art and the Maternal. Minneapolis: University of Minnesota Press.

C Meigh-Andrews, (2006).  A History of Video Art: the Development of Form and Function. Oxford: Berg Publishing.