The following is a collaborative inquiry about transitioning to motherhood using the artistic method of altering books. This work is grounded in our lived experiences as mothers, visual artists and scholars. Having experienced some of these complexities, our aim in engaging in this project was to disrupt the uni-dimensional representation of motherhood, which is presented in the coffee table books we altered. Using a broad remint in which altered books can be used as ‘an expression of one’s self, a piece of art, an experiment or a conversation piece’ (Lincoln 2004, p. 21), we sought to establish a dialogue with one other and the viewer about the experience of transitioning to motherhood. Below, we would like to present pages of our two altered books with a contextual and methodological description.

Despite the multidimensional nature of this transition, visual representations across a range of media of pregnancy, birth and the transition to motherhood in cultures in the global north continue to be largely idealized and uni-dimensional (Bassin, Honey, & Kaplan 1996; Liss 2009; Lintott 2011). Coffee table books – usually hardcover luxurious books that contain rich illustrations or photographs – offer one medium that conveys representations of women transitioning to motherhood, that we would like to examine here. They are often presented as gifts or displayed in distinctive spaces, within the home, where they are visible to the owner as well as to the visitors. As works of art, they can serve as modes of self-expression (Dunway 2005), yet they also contribute to promoting unrealistic expectations of motherhood that are presented by other media forms, by peers and healthcare professionals, and in parenting manuals (Cowdery & Knudson-Martin 2011; Darvill et al 2010; O’ Faney and Shenassa 2013; Razurel, Bruchon-Schweitzer, Dupanloup, Irion, & Epiney 2011). In this sense they can contribute to a disruption of identity and relationships (O’Faney & Shenassa 2013, p. 616) because of the incongruity that exists between the idealized images and the realities of adjusting to the complexity and ambivalence of motherhood (Parker 2009).

To subvert the idealized representations that these coffee table books depict, we decided to alter them. Altered book-making is a process in the visual arts where a pre-existing book is changed using a variety of materials and techniques such as painting, drawing, collage, adding found objects and embellishments (Cobb & Negash 2010; Chilton 2013; Klorer 2014). Altered books have been used, for example, in art therapy (Chilton 2013; 2007; Klorer 2014; Cobb & Negash 2010) as a form of self-expression where by ‘reauthoring a book that already exists symbolizes the parallel possibilities that clients have to reauthor their own lives’ (Cobb & Negash 2010, p. 54). We discovered that through altering the coffee table books, we were able to depict our own visions and experiences of transitioning to motherhood and to provide an alternative critical reading of these books.

(Original book and all original images by Anne Geddes, 2003) 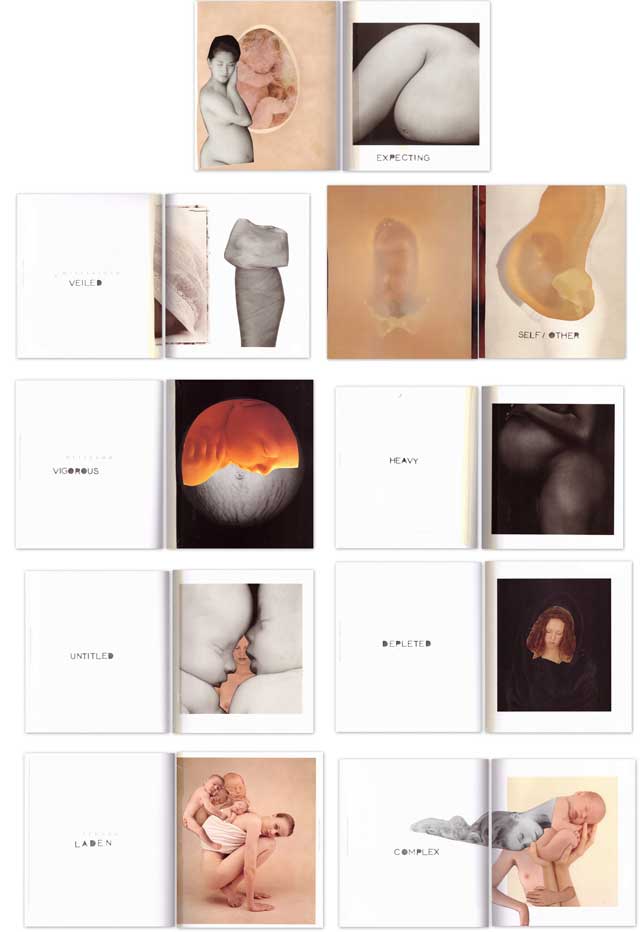 The original book that I chose was that of a well-known photographer Anne Geddes titled Vida – life – published in Spanish. The book features photographs of newborns, infants, and their mothers in the nude. Most photographs are accompanied by a title or a word to describe them. The images feature attractive white models with their newborns, which appear invariably serene and calm. The mothers’ bodies do not seem to be altered by the childbirth experience and are uniformly slender and flawless. The titles included words such as ‘celestial’, ‘precious,’ ‘perfect,’ ‘unique,’ and ‘exquisite.’ The book claims to celebrate mothers and infants, and the photographs display exceptional aesthetic and talent. However, these images present a uni-dimensional, idealized perspective on new mothers’ experience that undermines its complexity. To alter the book, I used the technique of montage. According to Weingrod, ‘a montage is a two-dimensional arrangement of existing pictures such as photographs, drawings, paintings, or prints that may have been fragmented, torn, and overlapped and then positioned into a composition’ (Weingrod 1994, p. 1). Montage in contemporary art has been posited as a means to explore identity issues, particularly to reflect identity as unstable, fluctuating and indeterminate (West 2004, p. 210). In creating new relationships between elements of an image, montage has the capacity to question the relationship between image and ideology. For example Middleman has written about montage in the context of a feminist aesthetic based on the work of the artist Anita Steckel (1930–2012), who created montage imagery that criticized sexual oppression, war, and racism. Steckel, cited by Middleman, stated about this technique: ‘No matter how upsetting the subject matter of a painting, we feel relatively safe. We know it isn’t really real. But paint an image into a photograph, which we are conditioned to believe an unconditioned reality – then there sets up uneasiness of another sort’ (Middleman 2013, p. 22).

The method of creating the montage images for this altered book involved selecting, cutting, and rearranging the images that were found in Geddes’ 2003 coffee table book. The images were ordered so as to reflect a more chronological timeline of transitioning to motherhood: starting with pregnancy, then giving birth and finally becoming a mother of an infant. Next to the original titles of each photograph, I wrote alternative ones that contested the originals, in order to provide a multidimensional reading. 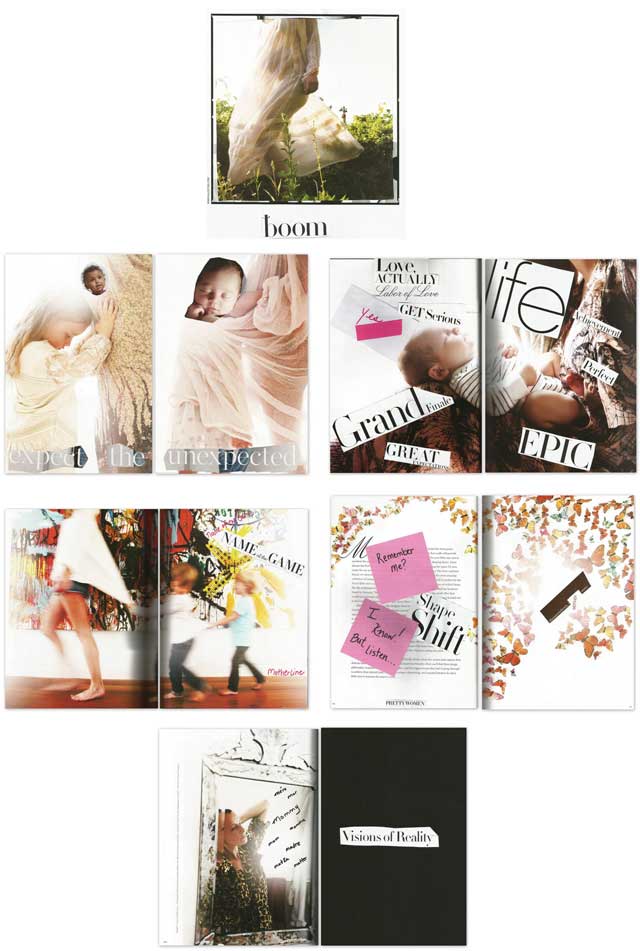 In altering The Glow, a book on stylish motherhood, the richness of diversity – which is integral in the transitioning to motherhood aesthetic – turns into a bold visual statement. As a young mother, I have witnessed the idealized representations of new mothers. Through this altered book I tried to provide a different narrative by moving away from the single inheritance of motherhood.

The Glow was a great book to reimage with another colorful perspective on transitioning to motherhood. It brings a vision of motherhood through photography and biographical stories; each one of which provides a momentary view of the intimate lives of stylish women. These women share their intimate stories of transitioning into motherhood through a curated lens. The altered book was intended to reconstruct these lenses and dispositions acquiring personal and social meanings from both visual and verbal inquiry.

Collage was used as a technique to alter the book. Collages ‘are visual artworks that are created by selecting magazine images, textured papers, or ephemera; cutting or altering these elements; and arranging and attaching them to a support such as paper or cardboard’ (Chilton & Scotti 2014, p. 163). My altering process embraced mixed media collage, containing diverse materials such as the book’s original photographs, paper phrases and my own writing. According to Seiden, the purpose of collage is ‘making ordinary into something special and bringing diversity into unity’ (Seiden 2001, p. 103).

Collage was used as a technique to illustrate how the book’s emerging motherhood lifestyle creates contradictions into how transitioning to motherhood is viewed. According to Davis, collage can be used ‘to disrupt, parody, and challenge the logic and sophism of conventional signifying practices and representations’ (Davis 2008, p. 246). We may say that in one sense, images portrayed in the Glow are idealized. Yet at the same time the dream of motherhood is not too distant from The Glow. Altering this book using collage, my aim was to create a space where the idealization and realities of transitioning to motherhood can coexist.

Through this collaborative artistic inquiry, we sought to represent the multidimensional nature of transitioning to motherhood. Altering books, using montage and collage, provided us with an opportunity to challenge and subvert the idealized representation of motherhood and offer an alternative reading of this life change. By sharing the books with each other and the viewer/reader, we learned that transitioning to motherhood is a life changing experience that is necessarily complex and is influenced by a variety of cultural and personal factors. With these altered books, we celebrate each woman’s experience of becoming a mother and encourage more diverse and personal representations of these experiences in the visual culture.

The authors declare that they have no competing interests.

A Liss, (2009).  Feminist art and the maternal. University of Minnesota Press.