7 positions in 2 hours (2013) is a drawing that documents the process of making the short film Role Reversal Rehearsal. It became quickly apparent that the process of making the work was more dynamic and interesting than the finished piece itself. Relationships between the childcare arrangements of the participants and the collective working process brought about the necessity of collaboration for parent artists. Each participant gave their time, energy and creative insight towards filming a series of birthing positions with roles reversed. The male performer became the central figure in an attempt to prompt empathy, humour, and to embody the importance of the male role in childbirth. There were two hours to choreograph, rehearse, and film the sequence. The drawing by Ackerman encapsulates the 'rhizomatic' approach to producing creative work under the constraints of parenthood. The 'arborescent' structure of hierarchy encouraged in industrial filmmaking is subsumed in favour of a horizontal structure. This new structure allows for the creative input, and flow of collaboration between all people involved - including the 3 and 5 year olds, who contributed ideas for camera and soundtrack in situ. 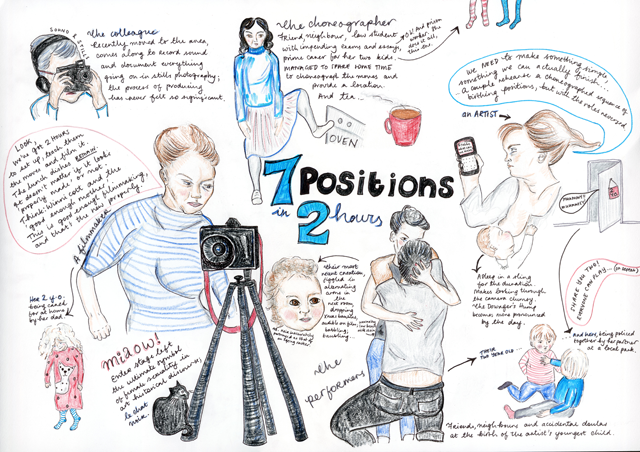